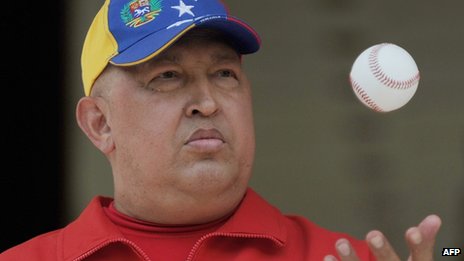 Venezuelan President Hugo Chavez will have further medical treatment in Cuba, where he had months of cancer therapy.

Mr Chavez, who was re-elected in October, is due to be sworn in for a third term in January.

In a letter to the National Assembly, Mr Chavez said he needed further therapy to recover from this year’s “tough electoral campaign”.

In May he declared himself free of cancer. There is no indication in his letter that the cancer has returned.

Mr Chavez, 58, was first diagnosed with an undisclosed cancer in 2011.

He has since had repeated surgery in Cuba, but finished his treatment there earlier this year.

In his letter to the National Assembly, Mr Chavez says he is returning to Havana following medical advice.

“Six months after I had the last session of radiotherapy, I have been advised to begin a new special treatment, with several sessions of hyperbaric oxygen therapy and physiotherapy,” says the letter.

The treatment is aimed at continuing to “consolidate recent health improvements,” he adds.

The left-wing president was first elected in 1998.

During the electoral campaign, he dismissed rumours that he had not been cured of his cancer, and vowed to serve out his six-year term.