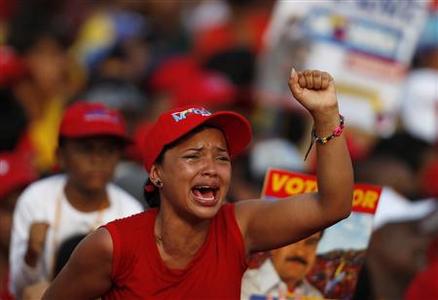 By Daniel Wallis and Todd Benson

(Reuters) – The late Hugo Chavez’s self-declared socialist revolution will be put to the test at a presidential election on Sunday that pits his chosen successor against a younger rival promising change in the nation he polarized.

Most opinion polls give his protege, acting President Nicolas Maduro, a strong lead over opposition challenger Henrique Capriles thanks to Chavez’s endorsement and the surge of grief and sympathy over his death from cancer last month. 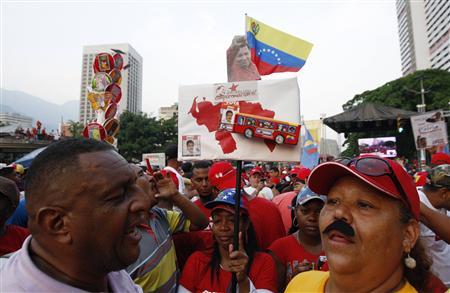 The candidates closed out official campaigning on Thursday with dueling rallies, both drawing hundreds of thousands of boisterous supporters. Taking a page out of Chavez’s playbook, a fiery Maduro marched through the streets of the capital draped in a Venezuelan flag and called on voters to follow “commander Chavez as the spiritual guide of the fatherland.”

“I am the son of Chavez,” the burly 50-year-old former bus driver shouted to supporters in downtown Caracas. “I am ready to be your president.”

Waving posters of the late president, the crowd sang back the campaign slogan, which rhymes in Spanish: “Chavez, I swear to you, I’ll vote for Maduro!”

Capriles, an energetic 40-year-old state governor, wrapped up his second presidential campaign in seven months – he lost to an ailing Chavez last October – in the nearby city of Barquisimeto, pledging to end the divisive politics of the late president’s 14-year rule and the rampant crime that is the top concern of Venezuelans.

“Those who govern today have never done anything for your security. Sunday we’re going to choose between life and death,” Capriles roared to the crowd. “If you want a future, you have to vote for change, for a different government.”

At stake is control of the world’s biggest crude oil reserves, economic aid to a host of left-leaning governments around Latin America, and the legacy of what Chavez liked to call “21st century socialism” – a mix of hard-left politics, heavy government spending on the poor, and growing state control over the economy. 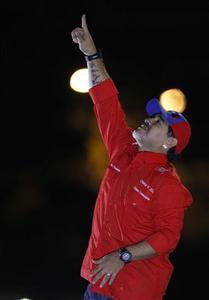 The presidential vote will be the first time that Chavez isn’t on the ballot in two decades, but in many ways the election is all about him. Maduro has cast himself as Chavez’s “first apostle” and has sought to emulate his former boss’s fiery rhetoric on the campaign trail.

At every rally, Maduro has played a video of Chavez giving him his blessing in an emotional last speech to the OPEC nation of 29 million people before he succumbed to a two-year battle with cancer on March 5.

Keenly aware of Chavez’s cult-like following among the poor, Capriles has spent much of the campaign denying Maduro’s claims that he would get rid of the oil-funded social spending that was the cornerstone of the late president’s popularity. He has also sought to court Chavez supporters by promising to raise wages by 40 percent.

If Maduro wins, he will face big challenges from day one as he seeks to control the disparate ruling coalition without his predecessor’s dominant personality or the robust state finances that helped Chavez win re-election last year.

Capriles would face an even tougher landscape if he wins. Chavez’s rule thoroughly transformed Venezuela, and nearly all of the country’s institutions – from ministries and government agencies to the military and state oil giant PDVSA – are packed with die-hard Chavez supporters.

Capriles touched a nerve with scathing attacks on Maduro and others whom he denounced as “skin-deep revolutionaries.” He accused them of betraying Chavez’s legacy by filling their pockets while paying only lip service to his ideology.

Maduro, meanwhile, has painted his rival as a pampered rich kid who represents a wealthy and venal Venezuelan elite – and their “imperial” financial backers in Washington.

A descendant of European Jews on his mother’s side, Capriles comes from a wealthy family, but has sought to project a man-of-the-people image riding into slums on his motorcycle and nearly always wearing a baseball cap.

Maduro, a former member of a rock band and a union activist, rose to be Chavez’s foreign minister and vice president, but has been playing up his modest roots at rallies, frequently calling onto stage fellow workers whom he recognizes.

The campaign has been characterized by personal attacks from both candidates, plus a dose of surrealism from the folksy Maduro. While visiting Chavez’s hometown, Maduro said he was visited by the late leader’s spirit in the form of a little bird, a claim that was mocked by the opposition as crass populism.

Maduro poked fun at the opposition at his closing rally by perching a bird on his shoulder, a gesture that drew roaring cheers from the crowd, which included Argentine soccer legend Diego Maradona, who flew in to support Maduro.

In another bizarre turn, Maduro also warned anyone thinking of voting for his rival that they would bring down a centuries-old curse upon themselves, playing on the fertile mix of animist and Christian beliefs in Venezuela’s plains and jungles.

In a nation where Chavez’s confrontational rhetoric helped fuel deep mistrust between his supporters and the opposition, both political camps have repeatedly accused the other of dirty tricks and fomenting violent plans.

Loyal “Chavistas” often accuse the opposition of plotting a re-run of a brief coup against Chavez a decade ago, while the Capriles camp says the government is shamelessly using state resources to try to ensure Maduro’s triumph.

Maduro has accused the opposition of planning to use mercenaries to kill him and sabotage the electricity grid, and also accused the U.S. government of plotting to kill Capriles and then blame it on his administration to sow chaos.

Capriles said those kind of shrill claims are an echo of the worst of Chavez’s rule, and only aim to spread distrust and fear. Chavez himself often unveiled supposed assassination plans targeting him, which critics dismissed as cynical efforts to keep voters on a war footing and distract them from daily worries such as violent crime, inflation and corruption.

“You can win the elections in Havana. I’m going to win them here in Venezuela,” Capriles said in one of his final speeches.

The challenger is touting a Brazil-style model that blends pro-business policies with strong spending on social welfare projects, and he says Maduro’s tenure as acting leader has only added to people’s problems with a devaluation and new currency controls.

Capriles says that if he wins he will stop “gifting” Venezuela’s oil wealth to other nations, and will cool ties with distant Chavez-era allies such as Syria, Belarus and Iran.

The U.S. government will be watching the vote closely in the hope of better relations after years of tensions with Chavez.

Many Venezuelans say they will stay true to the dying wish of their “commander” and vote for Maduro, whatever they may feel about how he stacks up as successor to the towering Chavez.

“I loved and still love commander Chavez and I defend the revolution. I believe in Nicolas. The commander chose him for a reason,” said Aritza Beltran, a 30-year-old teacher in Caracas.