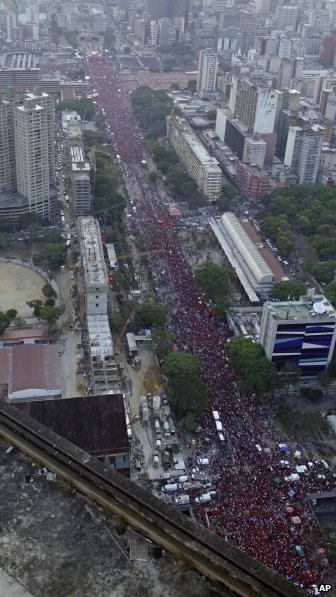 The main Venezuelan presidential hopefuls ended their campaigns with massive rallies, ahead of Sunday’s election of a successor to President Hugo Chavez, who died last month.

Hundreds of thousands of acting president, Nicolas Maduro’s, supporters took to the streets of Caracas.

Opposition candidate Henrique Capriles spoke to another large crowd in the northern city of Acarigua.

Venezuelans will choose the successor to the late Mr Chavez on 14 April.

The main avenues of the capital, Caracas, were taken by the red shirts of Mr Maduro’s supporters

In his final speech, Mr Capriles promised to revive the economy within a year and said his team was already working at their first measures.

“I ask you for the opportunity to show that I can indeed govern and make things right,” he told the crowd.

Mr Capriles says he will not dismantle Chavez-era social programmes, but promises to eradicate official corruption.

The charismatic leader died last month after 14 years in office.

In Caracas, the main avenues were filled with red-shirted crowds, the favoured colour of Chavez supporters.

Mr Maduro, who was handpicked by Chavez as his political heir, described himself as a son of the leader and vowed to continue his socialist revolution.

He is very critical of Mr Chavez’s left-wing policies and says he is inspired by the Brazilian model of former President Luiz Inacio Lula da Silva, whose government managed to achieve economic growth and lift millions of people out of poverty.

Opinion polls say acting President Maduro has a strong lead over his rival.