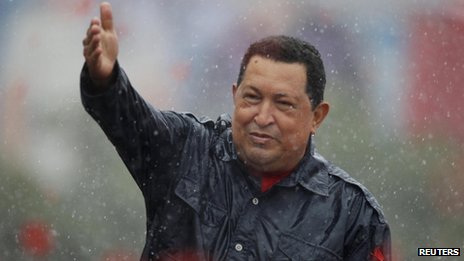 Venezuelan president Hugo Chavez has promised to carry on with his programme of social reforms and eradicate poverty if he is voted in for a third six year term in Sunday’s election.

Tens of thousands of his supporters gathered in the capital, Caracas, for his final rally before the vote.

Opposition candidate Henrique Capriles is expecting to match those crowds as he speaks in the city of Barquisimeto.

Nearly 19m Venezuelans are registered to vote in a tightly contested race.

Mr Capriles, who is touring three western Venezuelan states in the final campaigning day, has vowed to boost the economy and create jobs.

Wearing predominantly red, supporters of President Hugo Chavez filled the main avenues of Caracas from the early hours of the day.

“Due to the circumstances, I must be brief,” he said as be began his speech under heavy rain.

Mr Chavez, who has been in power since 1999, told them he needs another term to consolidate his social reform programme. 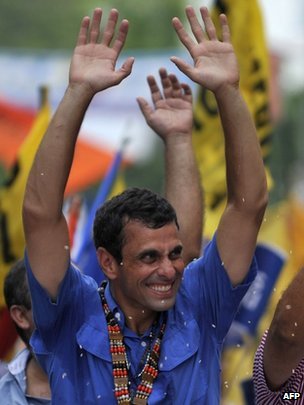 Capriles is backed by a coalition of more than 30 parties

“In all these years, we managed to save the country and have built the foundations for the future,” he said.

“In six years’ time, we will be the first on health and education. In 10 years, there will be no more homeless in Venezuela,” Mr Chavez promised.

If he wins the vote and finishes his term, he will have been in power for 20 consecutive years.

This seems to be the tightest presidential race in Venezuela in over a decade, says the BBC’s Sarah Grainger in Caracas.

The campaign has been fiercely contested, with strong language being used and accusations traded between the two camps.

The final rallies before the official end of the election campaign play an important part in the strategy of both candidates.

Seven of Caracas’ main avenues were closed to traffic during the day, with supporters of President Chavez coming from all over the country.

Mr Chavez finished treatment for cancer less than six months ago and has reassured supporters that he is cured and fit to serve out his term.

Mr Capriles, a 40-year-old lawyer, has chosen a traditional stronghold of President Chavez, Barquisimeto, in northwestern Lara state, for his final address.