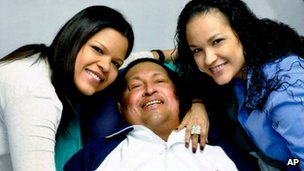 Venezuelan President Hugo Chavez is receiving chemotherapy in a Caracas hospital after cancer surgery in Cuba, the vice-president has revealed.

Nicolas Maduro was speaking after a Mass at a military hospital in honour of the president.

On Thursday, he went on TV to say Mr Chavez was battling for his life.

The Venezuelan leader, re-elected in October last year, returned to Caracas last month, but little has been heard about his condition until now.

While everybody watches and waits, and politicians get ready for a possible election, what is certain is that Venezuela’s future depends on Mr Chavez’s health”

Photos of him in smiling in bed, with his daughters beside him, were released shortly before he was flown home.

Late on Friday, a Mass was held at a new chapel at the Caracas Military Hospital, where the authorities say he was taken for treatment last week. One of the president’s daughters, Maria Gabriela, and senior officials attended the Mass.

“The treatments Commander Chavez is receiving are tough, but he is stronger than them,” the vice-president told reporters as he left the chapel.

He was speaking after opposition leader Henrique Capriles accused him of lying repeatedly about the president’s “real situation”.

As speculation mounts about the president’s future, a number of students have chained themselves together in a street in the capital, insisting the government “tells the truth”.

The government says Mr Chavez is breathing with the help of a tracheal tube and meeting senior ministers from his sickbed at the military hospital.

Street vendors outside the Military Hospital where Hugo Chavez is being treated say life has not changed dramatically since the president came back from Cuba. “Everything is quiet, if anything, there are more police”, said Luis, who sells orange juice and bread.

More journalists wait outside the hospital, with no chance to go in. One managed to get to the eighth floor, but not the ninth where the president is.

With a constant bustle of patients, employees and suppliers in and out, the media had hoped to get some detail about the president’s illness. But there have been no leaks so far – all we know comes from government sources. Just as it was when Hugo Chavez was in Cuba.

Mr Maduro told reporters that after a “general improvement” in his condition, the doctors had decided to start “complementary treatments”.

“Do you know what complementary treatments are? They are chemotherapy that is applied to patients after operations.”

He added that the president was communicating with his aides “in writing and other ways he has come up with”.

“You know that President Chavez is very creative and his hands won’t be tied when it comes to communicating orders, guidelines and concerns.”

The 58-year-old president, who has been in office for 14 years, revealed he had cancer in June 2011 and has already had four operations, as well as chemotherapy and radiation therapy.

It is believed he has cancer in his pelvic area but his exact illness has never been disclosed.

Last seen in public late last year, he was reported to have suffered a severe respiratory infection after treatment in Havana.

He was re-elected for another six-year term in October 2012, but the Supreme Court ruled that his swearing-in could be delayed because of his illness.

The BBC’s Irene Caselli, in Caracas, says more than half of Venezuelans believe the president will recover from his illness, although almost a third do not believe he will return to power.

The vice-president has been named by Mr Chavez as his chosen successor.

If the president is unable to return to office, an election must be held within 30 days under the constitution.