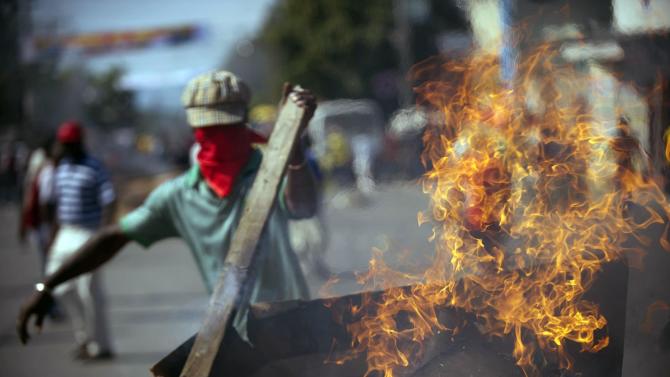 Protesters block a street with burning tires and barricades in the center of Port-au-Prince, on December 13, 2014 (AFP Photo/Hector Retamal)

Washington (AFP) – US Secretary of State John Kerry Tuesday urged Haiti to hold parliamentary elections as soon as possible to end a political crisis that has sparked violent protests in the impoverished Caribbean nation.

Haiti’s Prime Minister Laurent Lamothe resigned under pressure Sunday, clearing the way for a new government to tackle an impasse that has blocked parliamentary elections for three years.

Haiti is still struggling to recover from a catastrophic 2010 earthquake that devastated Port-au-Prince and claimed the lives of more than 100,000 people.

“Recognizing the concessions made by all sides to resolve the impasse, the United States urges all parties to reach without delay a definitive agreement on all outstanding issues and to carry out that agreement in good faith,” Kerry said.

“Too much progress has been made since the earthquake to risk going backwards now,” he said, urging Haiti’s leaders “to negotiate a solution that will open the door for elections to be scheduled as soon as possible.”

If elections are not held before January 12, the legislature will be automatically dissolved and President Michel Martelly can rule by decree.

But Kerry said Lamothe’s resignation was evidence that Martelly was committed to resolving the situation, and commended him “for his courageous efforts to resolve the deadlock.”