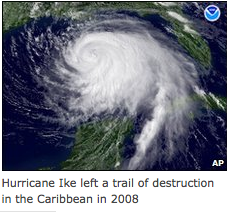 As many as 14 hurricanes could hit the Atlantic basin this year, the top US climate agency says.

The National Oceanic and Atmospheric Administration (NOAA) forecasts 14 to 23 named storms. Eight to 14 of these could develop into hurricanes, it says.

The season could be one of the most active on record, with between three to seven major hurricanes, the NOAA said.

“In short, we urge everyone to be prepared,” added a spokesperson for the agency said.

Major hurricanes can reach category three or higher, which means they bring sustained winds of at least 111mph (178km/h).

The NOAA says the seasonal forecasts have a 70% probability.

The hurricane season begins on 1 June and runs until the end of November.