Members of the US Congress have warned that post-earthquake Haiti is heading for unfair presidential and legislative elections next month because more than a dozen political parties have been barred from taking part.

In an open letter to US Secretary of State Hillary Clinton, 45 US lawmakers said Haiti needed a strong, representative government in the wake of January’s disaster which made a million and a half homeless and, according to the Haitian government, left more than 200,000 dead.

The letter said the decision of the electoral authorities, the Provisional Electoral Council, to exclude some of the most popular candidates from the 28 November poll, so potentially conferring decisions to a government perceived as illegitimate, was a “recipe for disaster”.

The US lawmakers say the exclusion of candidates, including those from Fanmi Lavalas, which they describe as “Haiti’s largest political party”, risks causing popular unrest.

And they go as far as quoting former US President John Kennedy: “Those who make peaceful revolution impossible will make violent revolution inevitable.”

Fanmi Lavalas leaders, some of whom are loyal to the exiled former Haitian leader Jean-Bertrand Aristide, have been barred on technical grounds following a dispute between candidates. 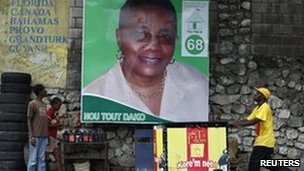 The popular Haitian hip hop singer Wyclef Jean was excluded from running in the presidential poll because he was said not to meet eligibility requirements.

The lawmakers’ letter to Mrs Clinton, issued last Thursday, says excluding candidates will undermine both the right of Haitians to vote and the resulting government’s ability to govern.

The current Haitian government led by President Rene Preval has rejected allegations that it is excluding popular candidates for political reasons.

It said Fanmi Lavalas was split and some of its leaders unrepresentative of the party. And it said Wyclef Jean had spent too much of his time resident in the United States to be eligible for election.

But many ordinary Haitian voters spontaneously say they support populists like Jean-Bertrand Aristide and Wyclef Jean, and they express deep scepticism about the current administration because it is not seen to have responded well to their needs after the earthquake.

The letter to Mrs Clinton said allowing the elections to proceed with the exclusions in place would “come back to haunt the international community” because the government that is elected will have to make difficult decisions about post-earthquake reconstruction and spend large amounts of aid money.

“Running transparently unfair, exclusive elections with the support of the international community, will leave many Haitians to conclude that they have no choice but to protest the elections and the consequent government through social disruption,” the letter says.

Finally, the letter concludes that the US government should not provide any funding to elections that do not meet “basic democratic requirements”.

Where have these guys been, for the past couple of months.

There was a meeting of ambassadors, in Port-au-Prince, at which the Canadian representative was firm in his statements to the effect that the Canadian government would not give a single penny to the elections, as presently planned.

American Ambassador Merten was less forceful  and made comments to the effect that his team would go along with things.

Well now, going along with things, has placed Haiti in its present precarious position. Had Merten let Preval know that the Americans would not tolerate what was going on, things could have been salvaged.

But then, Cheryl Mills, Hillary Clinton’s right hand woman, and defender of Bill Clinton, in the Monica Lewinsky scandal, flew into Haiti and told Ambassador Merten in blunt and rude terms…that Hillary did not want elections!!!!

Hillary is going to get her wish and Bill will be able to control more of the cash and funnel it into their accounts.

Do not be naive. Bill Clinton is reaping large commissions on the deals that are made.