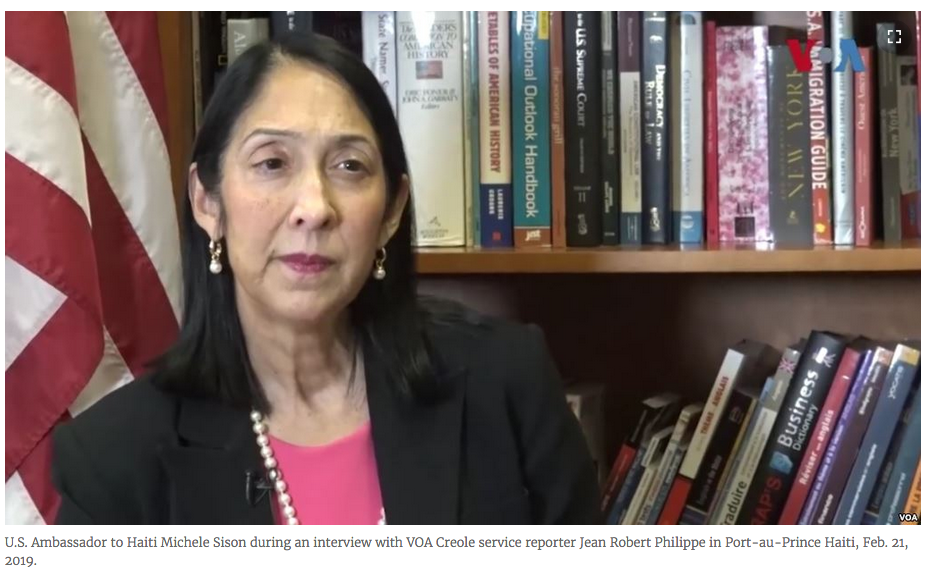 U.S. Ambassador Michele Sison expressed support Friday for Haiti’s President Jovenel Moise, who has been the focus of two weeks of nationwide protests calling for his resignation.

“We have always underscored, in our statements as well as our diplomatic conversations … our belief in the legitimacy of Haiti’s institutions and its elected officials,” Sison said in an interview with VOA Creole.

Asked if the United States was prepared to help mediate multiparty talks to try to resolve the country’s political crisis, the ambassador said the burden falls on Haitians themselves to resolve their problems.

“Many people are talking about the need for a national dialogue. The United States wants to encourage such a dialogue but it must be inclusive, it must be constructive, in good faith where all the stakeholders, political, economic, young people, women, the private sector, religious leaders get together to dialogue without preconditions,” she said.

Ambassador Sison spoke to VOA after news broke that five heavily armed Americans, who were arrested Feb. 17 while driving around downtown Port-au-Prince with high powered weapons, drones and satellite communications equipment, had been sent back to the United States, skipping their scheduled court appearance and would not be charged in the U.S.

“The return of these individuals was coordinated with the Haitian authorities,” Sison said, reiterating the State Department position. She did not elaborate.

The move angered Haitians who took to the airwaves and social media to vent their frustrations. 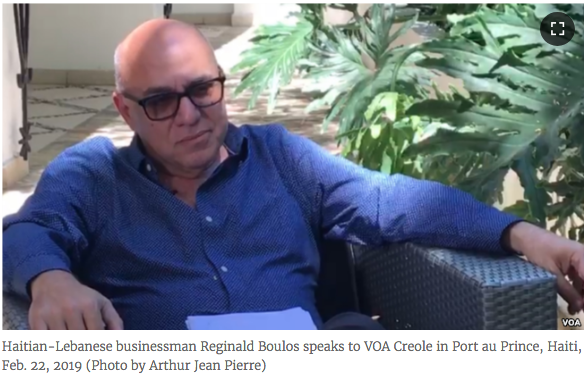 Boulos said he doesn’t take issue with the Americans leaving Haiti, but rather that officials claimed not to be aware of their departure.

“We have a justice minister who transformed himself into a judge,” the senator told VOA Creole. ” He left his own role behind to play a different role in the judicial branch. This is extremely serious.”

The senator said he could understand if the American were released as cooperation between law enforcement officials.

“But in Haiti we only exchange information (with our foreign counterparts) not prisoners,” the senator said.

Justice Minister Jean Roody Aly sent a letter to the Haitian Central Bureau of Judicial Police authorizing the transfer of the men to the U.S., according to the Miami Herald.

“I want to inform you that I’ve authorized a procedure of transfer to the United States of American citizens and United States permanent residents, a total of seven to respond to the charges of transporting illegal arms from the United States through the Haitian territory,” Aly said in a letter obtained by the Herald.

The Heraldcited federal sources saying the men would not be criminally charged and were debriefed. The men told American authorities they had been in Haiti to provide security for a businessman doing work with the Haitian government, according to the Herald.

Advice for Americans detained abroad posted on the State Department’s web sitesays: “One of the highest priorities of the Department of State and U.S. embassies and consulates abroad is to provide assistance to U.S. citizens incarcerated abroad. The Department of State is committed to ensuring fair and humane treatment for U.S. citizens imprisoned overseas. We stand ready to assist incarcerated citizens and their families within the limits of our authority in accordance with international, domestic, and foreign law.”

Among assistance the department cannot provide: “Get U.S. citizens out of jail” and “State to a court that anyone is guilty or innocent.”

In Miami, VOA Creole spoke to Haitian lawyer Philippe Brutus who said he doesn’t think Haiti has legal grounds to extradite the men to face charges.

“There is no logical reason to have them returned to Haiti. Logically if I were to receive an extradition request from a foreign country and I realized you had them in your custody and let them leave — I would ask you why I should send them back when you could have prosecuted them when they were in your custody.”

Brutus said it might be possible to charge the men with illegal possession of arms even though the alleged crime was committed on foreign soil.

“But they (U.S. law enforcement) have already said they won’t be charged with anything, so it’s clear that this is a closed case,” he said.