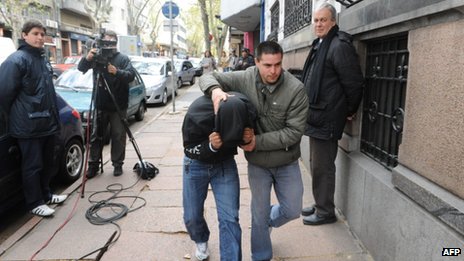 Four Uruguayan marines have been detained on suspicion that they abused a young man while serving as United Nations peacekeepers in Haiti.

The four men were charged with “private violence” against 18-year-old Johnny Jean, who says he was raped last year.

The four have avoided charges of sexual assault, but could still be sentenced to up to three years in prison.

The scandal emerged a year ago, when mobile phone footage began circulating in the internet.

The footage appeared to show the marines abusing the young man last September at a UN base in the southern Haitian city of Port Salut.

The four are being detained pending a trial. A fifth Uruguayan peacekeeper has been acquitted.

Private violence is defined by the country’s law as using “violence or threats to force someone to do, tolerate or allow something to be done”.

The four men have denied wrongdoing and called the incident a “prank”.

The case caused public outrage in Haiti, fuelling resentment and protests against the UN mission.

Uruguay is one of the main contributors to the 12,000-strong UN force (Minustah), which first arrived in Haiti in 2004.

The peacekeepers were brought in to restore order following the overthrow of President Jean-Bertrand Aristide, and its mandate was extended after the devastating earthquake in January 2010.

But Minustah has also drawn controversy, including allegations of excessive force.