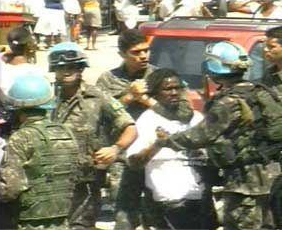 Port-Au-Prince, Haiti (CNN) — The United Nations planned to issue an apology Tuesday for peacekeeping troops breaching a Port-au-Prince university during an anti-government protest that turned violent.

David Wimhurst, spokesman for the U.N. Stabilization Mission in Haiti, told CNN that U.N. troops fired rubber bullets and used pepper spray Monday to quell a demonstration by students angry at what they said was government inaction in the aftermath of the massive January 12 earthquake.

He said the apology was being issued to the University of Haiti for U.N. soldiers entering its grounds.

The protest later escalated and spilled over into the nearby Champs de Mars plaza, where thousands of homeless Haitians have been living in congested makeshift tents.

Gunshots rang out and the smell of tear gas filled the air Monday night in one of the most serious confrontations since the quake decimated the city. It was the first time the United Nations had fired tear gas since then.

CNN crews saw discarded tear gas canisters scattered on the ground. It was unclear who opened fire or what prompted the altercation.

Witnesses told CNN that at least two youths were hit and injured by rubber bullets.