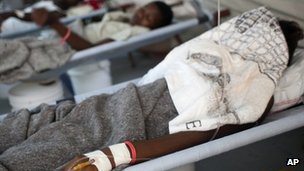 Haiti’s cholera epidemic has claimed the lives of more than 7,000 people

More than 100 Democrats from the US House of Representatives have called on the UN to take responsibility for introducing cholera to Haiti.

It is the latest twist in the allegation that UN peacekeepers unwittingly introduced the disease.

The United Nations’ envoy to Haiti, Bill Clinton, has accepted UN soldiers may have brought cholera.

But with more than 7,000 deaths so far, the UN said tackling the disease is more important than attributing blame.

In a letter to the US Ambassador to the UN, Susan Rice, the 104 members of Congress stated clearly: “Cholera was brought to Haiti due to the actions of the UN.”

They call on Ms Rice to pressure the UN to “confront and ultimately eliminate” the disease.

The letter says the UN should help Haiti mobilise enough money to build water and sewage systems to tackle the disease.

Mr Clinton has acknowledged that UN soldiers were the “proximate cause” of the cholera.

But UN officials shy away from taking full blame or issuing an apology.

They say tackling the disease is more important than apportioning blame.

They may also be reticent because Haitian and US lawyers are trying to sue the UN for financial compensation for the victims of cholera.

Many more have died.

This is an effort, by the international community – to minimize reality.

If you Google Cholera facts you will find a death rate of 5% is not unusual, under good conditions. Under Haitian conditions, it must be higher.

Sweep the embarrassment under the rug – yet again.