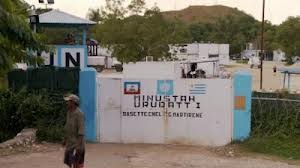 PORT-AU-PRINCE, Haiti — A Yale University report released Tuesday argues that the United Nations peacekeeping mission in Haiti should be held accountable for introducing cholera into the Caribbean nation.

In their report “Peacekeeping without Accountability,” researchers from Yale Law School and the Yale School of Public Health say there is ample scientific evidence to show that U.N. troops from Nepal inadvertently brought cholera to Haiti in October 2010 and that the world body should take responsibility.

The U.N. has said it enjoys legal immunity from such claims, and shot down an earlier effort by a Boston-based human rights group that sought compensation on behalf of a group of cholera victims who blame peacekeepers for the outbreak.

The Yale report’s authors also say the world body violates obligations under international law by not providing a forum to address the grievances of cholera victims. By failing to hold itself accountable for causing the cholera outbreak in Haiti, the United Nations violates the very principles of accountability and respect for law that it promotes worldwide, the report said.

Several scientific papers have suggested that cholera was introduced to Haiti in October 2010 shortly after a battalion from Nepal arrived. The disease is endemic in Nepal. A local contractor failed to properly sanitize the waste of a U.N. base, and the bacteria leaked into a tributary of one of Haiti’s biggest rivers, according to one study.

Health officials say Haiti’s cholera outbreak has since killed more than 7,500 people and sickened another 578,409.

The Yale study also notes that the U.N. has promised a standing claims commission under agreements signed with the Haitian government, but has never honored this obligation in Haiti “or anywhere else in the world, despite having entered into 32 such agreements since 1990.”

“As a result,” the report said, “a meaningful mechanism to ensure peacekeeper accountability has been rendered a nullity.”

The report calls for a claims commission, a public apology, support for victims and adequate funding for the prevention and treatment of cholera.

U.N. Secretary-General Ban Ki-moon announced in December a $2.27 billion initiative to help eradicate cholera in Haiti and the Dominican Republic, which share the island of Hispaniola, but the ambitious 10-year plan remains mostly unfunded.

The U.N. mission in Haiti, known by the French acronym Minustah, arrived in 2004 following the violent ouster of then President Jean-Bertrand Aristide. 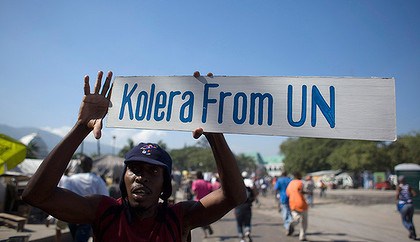