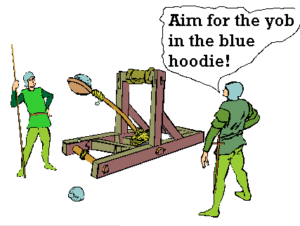 PORT-AU-PRINCE (Reuters) – The United Nations on Tuesday blamed political and criminal “spoilers” in Haiti for attacks on U.N. peacekeepers, saying those agitators sought to sabotage elections this month by manipulating public fear over a cholera epidemic that has killed more than 1,000 people.

Following anti-U.N. riots in two Haitian cities on Monday in which one protester was shot to death by a U.N. soldier, U.N. peacekeepers and Haitian police were bracing for possible further violence.

The capital, Port-au-Prince, was calm and the United Nations sent reinforcements with armored personnel carriers to Cap-Haitien in the north, the country’s second city and main focus of the latest violence.

On Monday U.N. troops were fired on and pelted with stones by protesters who blamed them for bringing the cholera bacteria to Haiti, which had not experienced an epidemic of the diarrheal disease for a century. The world body has denied Nepalese peacekeepers are the source of the cholera.

The head of the U.N. mission in Haiti, or MINUSTAH, Edmond Mulet, blamed political agitators for the anti-U.N. attacks in Cap-Haitien and in Hinche in the central region.

He said they were seeking to disrupt presidential and legislative elections set for November 28 in the impoverished country, which suffered a devastating earthquake in January.

“All this is certainly not spontaneous,” Mulet told Reuters in an e-mail, adding the United Nations had found the attacks in Cap-Haitien were “well planned and coordinated.”

“Traditional spoilers, ex-FADH (ex-members of the Haitian army), certain politicians, criminal figures, groups opposing the elections, are behind these incidents. The cholera epidemic fell into their lap as a good opportunity to create this situation,” Mulet said.

U.N. police spokesman Andre Leclerc told Reuters the situation in Hinche was calm on Tuesday. In Cap-Haitien, a small group of protesters yelled anti-U.N. slogans and threw stones in the morning near the U.N. headquarters in the northern city but no serious fresh violence was reported.

Cholera deaths in the month-old epidemic rose to 1,034 up to November 14, with 16,799 people treated in hospitals, according to figures published by Haiti’s Health Ministry on Tuesday.

“We are still coming across small villages where people are begging us to help stop this disease. There is not a single toilet or latrine in many of these rural villages,” Paula Brennan, cholera response manager for the Oxfam charity in Artibonite, a region north of the capital, said in a report.

The cholera epidemic has piled another crisis on the Western Hemisphere’s poorest state, stoking fear and anger in the already traumatized population as it struggles to rebuild from the January 12 quake that killed more than 250,000 people.

Cholera is spread by contaminated water and food but if caught early can be easily treated by oral rehydration fluids.

Despite the health, humanitarian and security challenges, Mulet said that from the logistics, technical and security points of view, “we can have successful elections.”

“We had expected these kind of incidents to happen, which have been part of previous electoral processes in Haiti. The vast majority of Haitians want elections, despite the last-resort actions by anti-democratic forces,” Mulet said.

Hostility against the 12,000-strong U.N. peacekeeping mission in Haiti has focused on the Nepalese contingent, whose camp in the Center province, at the headwaters of the Artibonite River, has been the subject of widespread rumors that it may have caused the original cholera outbreak.

The United Nations has repeatedly denied that riverside latrines at the Nepalese camp were the cause of the cholera even though media teams photographed the dumping of feces, from the Nepalese unit, into the Artibonite River system. A few days later Haiti’s cholera epidemic started. Some cynics suggest this is a prima facia case to support blaming the Nepalese unit that departed Nepal, for Haiti, days after their own home area was hit with a Cholera epidemic

The U.S. Centers for Disease Control and Prevention has said DNA testing shows the cholera strain in Haiti is most closely related to a strain from South Asia. The strain is the one found in Nepal..

Mulet said the U.N. mission had not yet considered withdrawing or relocating the Nepalese. “It would be very unfair to be part of a stigmatization campaign. On the other hand, if they can’t be operational in that part of the country, they could be replaced by another contingent,” he said.

Mulet is an embarrassment.

He is looking for a conspiracy when the facts support a simple fact that the population has finally reached a point where “enough is enough!!” Perhaps some individual, in each of the areas, finally stepped in front of the mob to lead them, but the eruptions were a spontaneous reaction to the aftermath of January 12’s earthquake, after which the MINUSTAH team effectively disappeared for a week, leaving Haitians to fend for themselves.

The eruptions are a final “enough is enough” reaction to Rene Preval’s government that stole $198,000,000 from Petrocaraibe Fund – set aside to help 2008 hurricane victims – victims still waiting for help.

The eruptions are an “enough is enough” reaction to Preval’s refusal to accept Cholera Vaccine while he and his wife have received injections. He says the peasants will not work to clean up the nation if they know they cannot contract Cholera. We hung people at Nuremburg for similar concepts.

The eruptions are  an “enough is enough” reaction to the entire Preval government an unconstitutional, and illegal government forced upon Haiti by Mulet’s MINUSTAH when the UN increased Preval’s vote count of 23% to 51% in order to avoid the required run-off.

It is an “enough is enough” reaction – finally – to MINUSTAH members involvement in the lucrative kidnap business/ MINUSTAH is an expensive criminal organization.

The eruptions are finally an  “enough is enough” reaction to Sunday’s unbelievable situation in which MINUSTAH team members, standing in front of MINUSTAH marked UN vehicles stopped passing Haitians to tell them to vote for Jude Celestin, Rene Preval’s chosen candidate for the presidency.

As is the case, public unrest requires a leader to light the fire. In the case of Cap Haitien the igniter  was Senator Jean-Charles Moise, a Preval loyalist. Preval recognizes his peril and will generate public unrest that seems to be against him, but, in reality will be used by Preval.  In other words, valid and justified public unrest will be made to appear as the actions of anti-Democracy criminals and other Preval opponents.

It is time for Edmund Mulet, and his MINUSTAH team to realize they are here to serve the Haitian people, not their own personal desires for a life of luxury amidst a starving people.

By the way, Mulet claims the situation in Cap Haitien is quiet and stabilized. It is nothing of the sort. Haiti’s Minister of the Interior, and Police Chief, traveled to Cap Haitien, in an unsuccessful effort to calm things. Cap Haitien and much of the nation is in rebellion.

Stay off the streets!