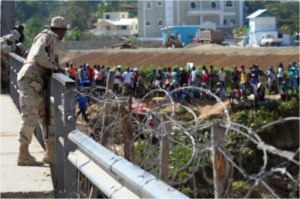 Hundreds of thousands of non-citizens residing in the Dominican Republic, most of whom are Haitian, face deportation. The two nations share the island of Hispaniola.

The U.N. on June 19 urged the Dominican Republic to take “necessary action to prevent any expulsions of stateless Dominicans” based on human rights implications. Dominican authorities said all people subject to deportation will face a screening process, and the U.N. suggested alternative methods of screening besides proof of documentation.

A constitutional court ruled in 2013 that the Dominican Republic would no longer grant automatic citizenship to those born in the country to parents who were not citizens. President Danilo Medina signed a bill into law in May 2014 that created a system to grant citizenship to those affected by the ruling.

Those unable to apply for a birth certificate became at risk of expulsion from the Dominican Republic starting June 17. Many do not have documentation to prove they were born in the country before April 2007, or cannot afford the registration fees. Anyone who does not register could get deported.

The law affects nearly 500,000 people, but only 300 have received permits which would allow them to obtain residency and work permits as well as register to vote or go to school. The government says they can use the birth certificate to apply for citizenship in two years.

Dominican Republic’s Electoral Board on May 27 released a list of 53,000 people potentially eligible for denationalization after reviewing 10 million birth certificates from 1929 to 2007 on file. 4,000 are under investigation and 132 could face trail for fraudulent registration.

Haiti announced a $2.5 million effort in Feb. 2014 to identify and register Haitian migrants living in another country, amid fears that the Dominican court ruling would leave many Haitians stateless.

Dominican Republic said March 4 it closed five of its consulates in Haiti, citing security concerns amid rising “aggression” between the two countries. Following negotiations, Dominican Republic officials announced that the consulates are set to reopen March 17. The Dominican ambassador to Haiti returned to Port-au-Prince March 16.

To curb the flow of undocumented immigrants from Haiti, Dominican Republic security forces installed three security brigades comprised of 1,000 troops each along the nation’s border. More than 40,000 people have been arrested for illegally trying to enter the country since January.

On April 19, the Dominican Republic’s largest trucker’s union said its rigs will not enter Haiti without the aid of UN security forces. The president said its drivers have experienced hostility and are not guaranteed safety from “Haitian police which we don’t trust.” Defense minister for Dominican Republic backed the union’s claims.

Dominican Army anti-riot troops also patrol the market held on the border of Haiti and the Dominican Republic every Monday and Friday. Dominican Army commander Jose Matos announced March 12 that the Navy has also deployed two ships to patrol waters to avoid illegal entry by sea.