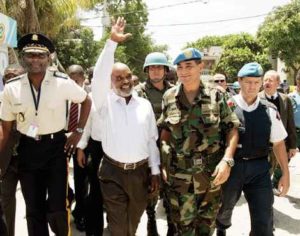 Haitian president Rene Preval called for more improvements to his shattered country at the UN in New York — while Colombian president Juan Manuel Santos advised the Security Council to focus on the “meager results” achieved there.

An earthquake in January of last year brought the country to its knees — killing thousands and leaving nearly two million homeless.

Despite a United Nations mission already in place when the earthquake hit — and despite the fact that the disaster was fifteen months ago — less than eight percent of the rubble has been cleared from the Haitian capitol of Port au Prince.

Despite the time and money spent — Secretary General Ban Ki-moon and his Special Envoy to Haiti — former American president Bill Clinton say that there are still basic questions that need to be answered.

The Secretary-General says one problem is funding — with millions of dollars of promised money not being delivered.

That leaves the cholera appeal less than half-funded and the overall Haiti appeal at only ten percent — says Ban.

A Haitian government that has for decades been known for its corruption may soon see change.

Recent UN-mandated election results for a new president are clear — and Ban says the new government must deliver trustworthiness first.

The man Haitians will count on to clean up the country’s debris — and corruption — will be a former musician — Michel “Sweet Micky” Martelly.

The current president — Preval — said the Security Council’s interventions had amounted to eleven years of military occupation in a country that has no war.
Preval added that he’d called long ago for the UN to deliver Haiti fewer soldiers and tanks — and more bulldozers — engineers — and police instructors.

Where has Preval been for the last 5 years?

He could have removed the UN at any time.

Instead, he used their soldiers to prop up his criminal government, sharing some of the proceeds with senior members of MINUSTAH.

At the lower levels MINUSTAH members made money in cocaine, kidnapping and prostitution, as well as kick backs on large contracts with major Haitian businessmen.