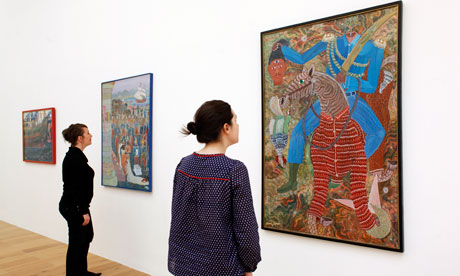 Paintings by Frantz Zephrin are showcased in the Kafou – Haiti, Art & Vodou exhibition at Nottingham Contemporary. Photograph: David Sillitoe for the Guardian

Haiti is often known for its grinding poverty, brutal oppression and natural disasters but the biggest exhibition of its art ever staged in the UK aims to provide more of a balance.

“When you walk in here, hopefully it is, on a simple level, visually eye-popping, astonishing,” said the director of Nottingham Contemporary, Alex Farquharson. “These images speak to a very rich culture. There is a lot of joy.”

Farquharson was speaking ahead of the opening of a major show of Haitian art inspired by Vodou, the religion which has been a central part of people’s lives since Haiti became the world’s first black republic in 1804.

The Nottingham show is ambitious. It brings together 200 works by 40 artists, from the 1940s to the present day. The beauty and inventiveness of artists mostly from impoverished backgrounds with minimal contact with any established art worlds is striking.

Farquharson said Haitian art is often shown in a folk art context, which is unfair. “If I didn’t feel that this work stood up to a lot of work that I think is most interesting in contemporary art then I really wouldn’t be showing it here,” he said.

He hopes it will not comes across as a kind of ethnographic exhibition of naive or as outsider art. “It is not that on a visual level, on a formal level or on an aesthetic level. The works are full of invention and you can differentiate the artists. We are being as exclusive as we would be in selecting contemporary artists for a show.”

The works and the stories they tell will be completely new to most visitors, with many having little more than the Bond film Live and Let Die as their Vodou reference point.

Co-curator Leah Gordon said Baron Samedi, the spirit of death in his top hat and tails, had become “the poster boy for Vodou” since he was memorably played by Geoffrey Holder in the film. He does indeed pop up quite a lot in the works, as do the Gede, the spiritual mitigators between life and death.

Gordon, who curates the Ghetto Biennale in Port-au-Prince, said she hoped visitors would see how humorously and irreverently death is often treated by Haitian artists.

The show takes up all four of the institution’s galleries, taking visitors on a journey beginning with the Centre d’art movement founded in 1944 and including work by Haiti’s most celebrated artist, Hector Hyppolite.

Another room shows work from the 70s and 80s, when Haiti suffered under the dictatorship of “Baby Doc” Duvalier. A final room shows the most recent work including art from the Atis Rezistans group, who make supernatural sculptures from materials including car parts, human skulls and bones.

The exhibition is being staged by one of Britain’s youngest public contemporary art galleries and one that proves the worth of capital spending on the arts.

Since it opened in 2009, Nottingham Contemporary has had nearly 700,000 visitors, double the amount than anticipated. Estimates suggest it will have added £23m to the local economy in its first three years.

Farquharson said the Haiti show had been a real challenge, with all the works being loaned by private collections. “It was really tricky logistically,” he said, as relationships had to be built from scratch. “That world is a different circuit from the ones we tend to move in – we’re not recognisable in it, although we are now, having made enough of a nuisance of ourselves.”

He hopes the show will be an eye-opener. “It is largely something outside the art world as most of us know it, but this work does speak to a lot of what the most interesting contemporary artists are involved in and thinking about right now.”

Kafou: Haiti, Art and Vodou is at Nottingham Contemporary until 6 January 2013.