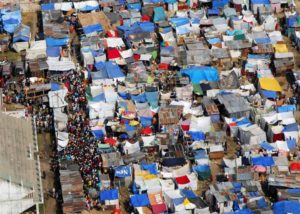 MEXICO CITY — As a new Haitian government seeks to jump-start aid to rebuild the country after the January 2010 earthquake, a draft of a new United States government report suggests that the scope of the disaster was not as severe as previously estimated.

The report, dated May 13 but not yet released publicly, comes as the new Haitian government seeks to fully collect the $4.6 billion pledged a year ago by international donors and as the hurricane season begins, raising the specter of additional trouble in the months ahead for the tens of thousands of people living in temporary camps.

The United States report said as many as 895,000 people moved into camps after the earthquake, not the 1.5 million estimated by the International Organization for Migration, an intergovernmental organization. At most, an estimated 375,000 people remain displaced, with a maximum of 66,620 living in camps, the report said, contrary to the migration organization’s tally of more than 600,000 people living in camps, the vast majority of them made homeless by the quake.

The amount of rubble that must be cleared has also been overstated, the report said, putting it at 3.7 million cubic meters, not the 20 million to 25 million originally estimated by the Army Corps of Engineers or the 10 million the United Nations reported this year.

But the United States Agency for International Development, or U.S.A.I.D., which hired a Washington research group to prepare the report, backed away on Tuesday from the report’s most incendiary figure, an estimated quake death toll of 46,000 to 85,000 people. The Haitian government announced in January that 316,000 had been killed; in the initial weeks after the quake, it said about 230,000 had died.

Carleene Dei, a U.S.A.I.D. director, said in a statement that “any comment on the death toll of the tragic earthquake of January 2010 that affected so many, is beyond the scope of the commission and purely reflects the views of the author.”

An agency spokesman declined additional comment, saying the report was still being reviewed. The lead author, Timothy T. Schwartz, is a cultural anthropologist who in the past has written critically of some aid relief in Haiti.

Mr. Schwartz declined to comment, but he defended his work on a blog, saying the higher death toll estimates were not supported by research or other evidence. His figure was derived from statistical sampling and an analysis of one part of Port-au-Prince, the capital.

In the early days after the quake, people swarmed into encampments with little accounting of how many people were there. Corpses were collected and buried with little documentation.

The Haitian government has never explained how it arrived at its death toll figures. The International Organization for Migration eventually began a census of the camp populations. It stood by its figures, which it said come from extensive field surveys.

The United States report, leaked to news organizations this past week, left some in the relief community wondering if it foretold a reduction in aid, which they said would be a premature retreat. International donors have given about 37 percent of the $4.6 billion pledged.

A version of this article appeared in print on June 1, 2011, on page A4 of the New York edition with the headline: U.S. Reduces Estimates Of Homeless In Haiti Quake.

1 thought on “U.S. Reduces Estimates of Homeless in Haiti Quake”