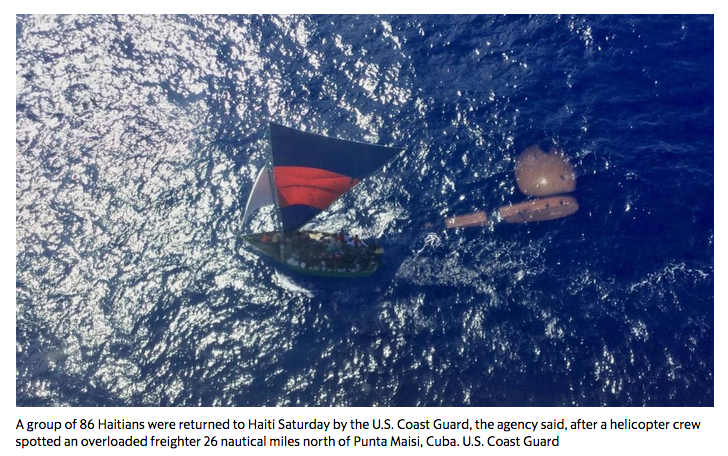 A group of 86 Haitians were returned to Haiti Saturday by the U.S. Coast Guard, the agency said, after a helicopter crew spotted an overloaded freighter 26 nautical miles north of Punta Maisi, Cuba.

The Coast Guard Air Station Clearwater MH-60 Jayhawk helicopter crew was on a routine patrol to Great Inagua, Bahamas, when it saw the 40-foot sail freighter. The Coast Guard Cutter Thetis was alerted, diverted to the area, and brought the Haitians aboard.

They were then repatriated to Cap-Haïtien, Haiti.

“This illegal migrant venture and vessel were ill-equipped to carry its passengers and dangerously overloaded,” said Cmdr. Luis Rodriguez, deputy chief of enforcement, in a Coast Guard release. “If it had capsized before we arrived on scene, this situation could have ended differently as we have tragically seen before.”

According to the Coast Guard, The Jayhawk crew remained on the scene to provide overhead support as the weather worsened.

In June, 50 Haitian migrants were repatriated to Haiti by the Coast Guardafter their overcrowded sailboat was intercepted near Cuban waters. Another 77 migrants opted to go to Cuba.

In March, two overloaded boats carrying a total of 201 Haitians were intercepted by the Coast Guardnear the Bahamas. As in Saturday’s interception and repatriation, the Jayhawk first spotted them struggling.

According to Coast Guard records, approximately 221 Haitian migrants have attempted to illegally enter the United States by sea since Oct. 1 compared to 2,488 Haitian migrants in fiscal year 2018.

“These numbers represent the total number of at-sea interdictions, landings and disruptions in the Florida Straits, the Caribbean and Atlantic,” the agency said.

The cutter Thetis is a 270-foot medium endurance cutter based in Key West.