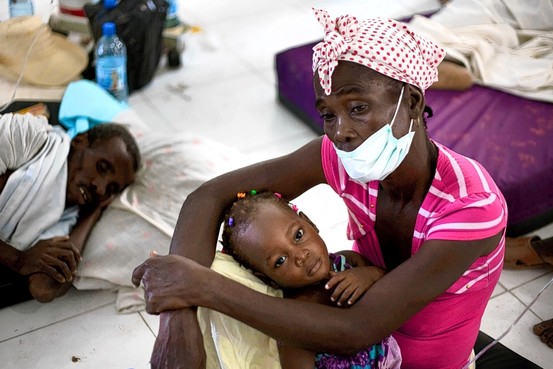 There is a humanitarian crisis happening in our own hemisphere, but it’s not likely you’ve heard of it. Thousands have died, threatening the economic and social stability of an entire country. And most tragic of all, it was inadvertently caused by a critically important international organization, which has not yet taken full responsibility for its actions.

I am speaking of the cholera outbreak in Haiti.

It’s hard to imagine a country enduring more hardship than Haiti has in the last five years. It was already the poorest country in our hemisphere when a massive earthquake leveled its capital in 2010, killing more than 200,000 people. Shortly after, cholera mysteriously appeared and produced a devastating epidemic. It has now infected upward of 700,000 people, and has claimed the lives of nearly 10,000.

The outbreak perplexed public health experts. Cholera had not been documented in Haiti in 100 years. Then The Associated Press reported that U.N. peacekeeping troops from Nepal carried strains of the disease with them, contaminating a large portion of Haiti’s drinking water. The United Nations initially denied any role in the outbreak, and has refused to redress complaints, claiming immunity under a 1946 convention. In January, a U.S. judge dismissed a lawsuit filed by human rights groups seeking compensation for Haitian victims.

Recently I met with members of the Haitian-American community in Miami to receive an update on the crisis. Last month, 154 Haitian-American leaders and organizations expressed their “deep outrage” at the United Nations’ failure to take responsibility for its mistakes, highlighting the need for justice and greater resources to combat the disease. And last year, 77 members of Congress sent a letter urging the United Nations to provide a settlement mechanism for victims.

The ongoing crisis in Haiti, where cholera continues to infect hundreds of people each month, is not getting the attention it deserves. We should not be indifferent to injustice against the most vulnerable among us.

First, the United Nations should acknowledge its role in this tragedy. Continuing to deny wrongdoing harms its credibility and could compromise the essential work it does around the world saving lives. To its credit, the United Nations established an independent panel to investigate possible wrongdoing. It should fully implement the panel’s recommendations — including better peacekeeper screening and sanitation at peacekeeper locations — and allow for an independent audit to verify progress.

Second, while resources are tight, as always, the United Nations should endeavor to broaden its campaign to combat the ongoing epidemic. There is still a threat of the situation worsening. Since cholera is a water-borne disease, Haiti could be one hurricane away from a massive spike in infections.

Third, the United States must assume a greater leadership role in our own hemisphere. We should lead an effort with the United Nations to better fund what needs to be done before we are all dealing with the failure to act. Healthy, functioning and stable societies in our half of the world are squarely in our national interests. Cholera has already spread to other countries — with one case reported in Florida. We must ensure that agencies like the Centers for Disease Control and Prevention have the resources they need to address crises before they reach our borders.

As president, I would embrace a new national security approach focused on proactive, long-term threat reduction and reinvigorated regional alliances. I would begin by improving our relationships with our closest neighbors, guided by the principles of transparency and accountability.

The United Nations, which has done so much to alleviate human suffering in the world, should pursue a similar approach. Some disasters, like earthquakes, are acts of God. But when they are made worse by human error, those responsible should acknowledge and correct their mistakes.