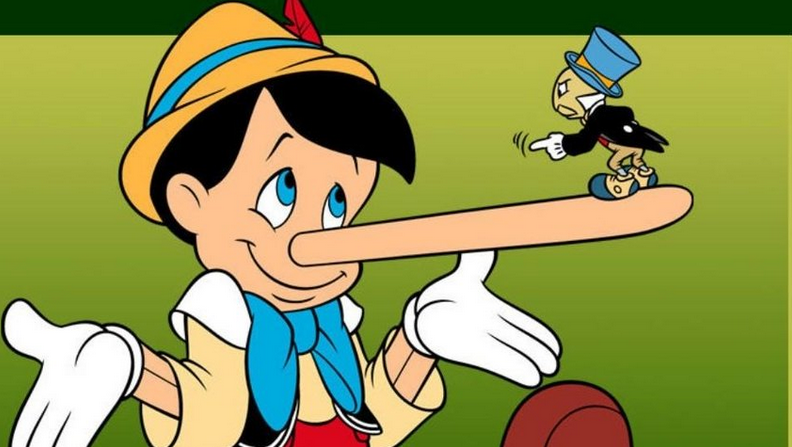 This would be startling if it didn’t match how he always purges unwelcome news from within his administration and from his reality.

With the new coronavirus, President Donald Trump has finally faced a crisis that’s not of his own making, and his response—dismissive, defensive, prevaricating, all politicized to the point of caricature—bodes ill for some other type of crisis that might embroil him, and us, before his term is up.

Earlier this month, Trump waved away reports of the virus as a blip that will “miraculously” vanish with warmer weather. This week, back home from his trip to India, watching the news of death tolls consume the morning talk shows, he tweeted:

Low Ratings Fake News MSDNC (Comcast) & @CNN are doing everything possible to make the Coronavirus look as bad as possible, including panicking markets, if possible. Likewise their Do Nothing Democrat comrades…. USA in great shape!

Trump had been touting the soaring stock market as a selling point in his reelection campaign; by that logic, he feared, a crashing market could spell his defeat. Presidential Medal of Freedom winner Rush Limbaugh piled on, calling the scare a deep state plot, noting that Nancy Messonnier, director of the National Center for Immunization and Respiratory Diseases, is the sister of Rod Rosenstein, the former deputy attorney general who played a prominent role in the investigation into Trump’s Russia connections. (Limbaugh also informed his listeners that the coronavirus “is the common cold, folks.”)

Not even Trump took that carpet ride. Instead, he started to do what other presidents have done in these circumstances: He heard a briefing from the Centers for Disease Control and Prevention. Afterward, he tweeted, “We have the best experts anywhere in the world and they are on top of it 24/7.” But then he held a news conference and returned to form, dropping his deference to experts, a pose he’d rarely taken, especially when their judgments run counter to his interests.

Asked about Messonnier’s claim that the spread of the virus was “inevitable,” Trump said, “Well, I don’t think it’s inevitable.” Then he muddied the waters, saying about the prospect of a larger U.S. outbreak, “It probably will, it possibly will, it could be at a very small level or it could be at a larger level.” Then: “Whatever happens, we’re totally prepared. We have the best people in the world. … We have the best prepared people, the best people in the world.”

In fact, Messonnier and other CDC officials had said we’re woefully underprepared. As for having “the best people,” the official supposedly in charge of emergency measures, Chad Wolf, acting secretary of homeland security, testified on Tuesday that the mortality rate for the coronavirus is about 2 percent, similar to that of ordinary flu. In fact, the rate for ordinary flu is less than 0.1 percent—meaning that even if the 2 percent figure were accurate (WHO estimates that outside of Wuhan, China, the mortality rate is 0.7 percent), people who contract the coronavirus would be more than 20 times more likely to die.*

This is one reason, among many, why having so many acting Cabinet secretaries—appointees who are unvetted and unresponsive to anyone but the president, for whom they are forever auditioning—is not a good idea. 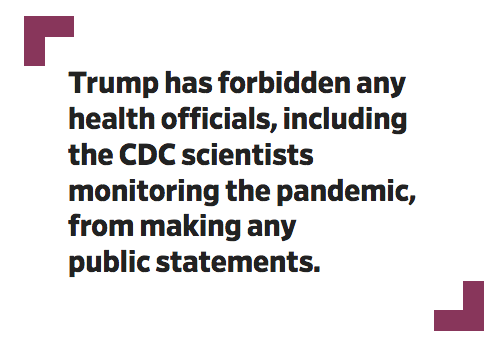 Since Wolf’s testimony, Trump has put Vice President Mike Pence in charge of a task force to combat coronavirus, telling aides that Pence has “nothing else to do.” Pence is the opposite of qualified for such a post: When he was governor of Indiana, he facilitated an HIV epidemic by vetoing a needle-sharing program among drug addicts, saying it would only encourage drug use.

Not only that, but the members of this task force include Treasury Secretary Steven Mnuchin and White House economic adviser Larry Kudlow—which reinforces suspicions that Trump’s main concern is the news of the virus and its effect on the stock market, not the virus itself and its effect on human life. In a tweet on Monday, after claiming that the virus “is very much under control in the USA,” Trump added, “Stock market starting to look very good to me!” (After a six-day slide, the S&P 500 is 12 percent below the peak that it had reached on Feb. 19, the fastest slide since the 2008 financial crisis.)

Making matters worse, Trump has forbidden any health officials, including the CDC scientists monitoring the pandemic, from making any public statements. Instead, they are to report exclusively to the Pence panel, which will be the government’s sole spokesman on the subject.

All this would be startling, except that it matches Trump’s pattern in dealing with other federal departments on which past presidents have relied when facing crises of various sorts—and his pattern is, as much as possible, to avoid dealing with them at all: to deprecate, depreciate, or dismiss people who have expertise.

After grousing over a flurry of senior officials who sometimes challenged his opinion or gave him unwelcome news, Trump now has the most groveling national-security team in memory. The diplomatic corps, demoralized by budget cuts and systematic disuse, has hollowed out. Civilian specialists in the Pentagon have departed in droves. The acting director of national intelligence is a hack who accomplished the remarkable feat of alienating our most prominent allies while serving as Trump’s ambassador to Germany, and his deputy director—a former aide to Rep. Devin Nunes, Trump’s staunchest loyalist on Capitol Hill—has been ordered to “clean house” at the CIA and other intelligence agencies, turning them into Trumpian fiefdoms and cleansing their reports of dissent.

Steve Bannon, Trump’s former chief strategist and still his ideological guidepost, once said his goal was “the destruction of the administrative state.” Trump took that to mean destroying all centers of power and influence except for the Oval Office and the annexes loyal to it. That’s what he is in the process of doing. His Cabinet, his staff, and the Republicans in Congress are giving him free rein. But they’re slitting their own throats in the process, for in a crisis, especially this crisis, no one is immune from the ravages of incompetent authoritarianism.

Correction, Feb. 28, 2020: Due to an editing error, this piece originally misstated that the mortality rate for ordinary flu was less than 0.01 percent. According to the CDC, it is less than 0.1 percent. It also misstated that that would mean the coronavirus death rate of 2 percent, as identified by DHS acting Secretary Chad Wolf, would be 200 times greater than the death rate for flu. It would be 20 times greater.