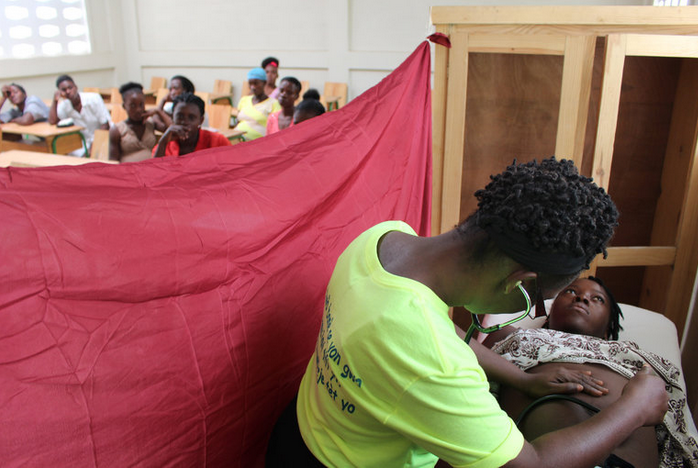 Some Haitians had never been examined by a doctor or nurse before this one-day clinic. It was supported by a United Nations agency that is now losing all U.S. funds. Credit Nicholas Kristof/The New York Times

PORT-AU-PRINCE, Haiti — When President Trump and his (male) aides sit at a conference table deciding to cut off money to women’s health programs abroad, they call it a “pro-life” move.

When women and girls don’t have access to family planning and reproductive health care, they’re more likely to suffer pelvic organ prolapses, in which the bladder, uterus or bowel may protrude from the vagina. Or they suffer a fistula, a childbirth injury that leaves them leaking urine or feces, stinking and ostracized, and sometimes unable to walk. Women with prolapses or fistulas sit in their huts, humiliated, wondering if they are cursed, waiting to die.

In a room here in the Haitian capital, women with cervical and breast cancer wait for nurses to examine their ulcerated bodies. Beyond their almost unbearable physical pain is their mortification that they smell of rotting flesh, and in some cases incontinence. They are heroic in their quiet refusal to give up.

It’s not that these horrific conditions are caused by U.S. policy, but Trump is now halting all funds for many organizations working tirelessly to prevent this suffering. First came the “global gag rule,” ending funding to overseas health aid groups linked in some way to abortion, including counseling that mentions it as an option.

When the French military set out to colonize, one thing they did to win compliance was to bring medical clinics.

The latest is that Trump just cut every penny the U.S. provides the United Nations Population Fund. This organization has nothing to do with abortions but is a central player in the global effort to fight for women’s health. 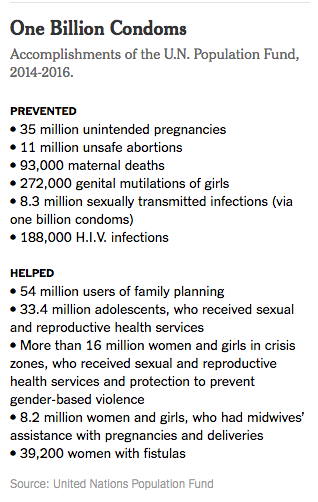 “If the U.N. Population Fund has less money, more impoverished women in Haiti will die,” said Holdie Fleurilus, a nurse at Innovating Health International, which runs the cancer center I visited.

Across town, Dr. Raymond Fleurimon, the medical director of the Isaïe Jeanty Maternity Hospital, was equally blunt: “If U.N.F.P.A. is out of the game,” he said, using the initials of the fund’s old name, “this maternity ward will collapse, it’ll be completely dysfunctional, and more women will die.”

“What a nightmare,” warned Dr. Rahel Nardos, a women’s health expert, cautioning that less money for the fund meant more prolapses and fistulas.

Republicans pushed to cut off the money because they think the fund colludes with China’s government in forced abortions there. But I lived in China for years, reporting extensively on the subject — and the critics have it all wrong.

Yes, China has relied on forced sterilizations and forced abortions. The U.N. Population Fund initially was oblivious, and in 1983 it stupidly gave a gold medal to the Chinese official overseeing forced abortions. But that’s history, and for decades the fund has put strong pressure on China to end the coerced abortions.

Moreover, the fund persuaded China in 1992 to switch to a more effective IUD, averting half a million abortions a year. Over the years, that’s 12 million abortions the Population Fund has prevented there. Can any anti-abortion group match that?

Those affected by Trump’s cutoff of funds for women’s health are people like Darling Leonce, a pregnant 16-year-old I met when she showed up for a prenatal exam at a one-day clinic set up in a remote part of southeastern Haiti. The clinic was supported by the U.N. Population Fund, and it was the first interaction Darling had ever had with a doctor or nurse in her life.

Darling never went to school, can’t read or write, and had never heard of birth control. Yet here she received her first-ever physical exam and was encouraged to deliver in a hospital rather than in her village. A nurse coached her on breast-feeding, gave her prenatal vitamins and acquainted her with contraception.

“Choose your partner carefully, and don’t have a kid just because you have a boyfriend,” the nurse advised.

Politicians in Washington don’t have a clue about the hideous things that happen when women are marginalized and health care is unavailable. What the Population Fund does is help girls like Darling avoid unwanted pregnancies and the nightmare of a fistula, a prolapse or cancer. That’s why The Lancet medical journal called Trump’s cutoff of funds “misogyny.”

Oh, and on abortion — one more thing.

When contraception is unavailable, people find ways to get abortions even where it’s illegal, as it is here. On my way back to the capital from the one-day clinic, I stopped at a pharmacy in a small town and asked for misoprostol, an abortion drug. For $15, the sales clerk handed over more than enough pills for an abortion.

Yet a group of blundering men in the Trump administration posture as moral leaders, and the result is that women in places like Haiti will suffer fistulas, prolapses and agonizing deaths in childbirth or from cervical cancer. Some of these women will be humiliated by the failures of their flesh, but the real shame belongs to sanctimonious zealots in Washington who don’t have a clue what they’re doing.

And this is pro-life?