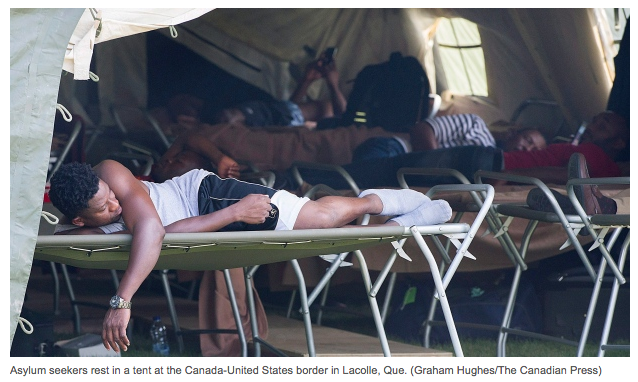 Prime Minister Justin Trudeau has a message for asylum seekers: crossing illegally into the country doesn’t offer an advantage when it comes to obtaining refugee status in Canada.

“If I could directly speak to people seeking asylum, I’d like to remind them there’s no advantage,” Trudeau said at a news conference Sunday in Montreal.

“Our rules, our principles and our laws apply to everyone.”

Trudeau’s comments come as the government grapples with a surge in asylum seekers crossing into Quebec.

In the first two weeks of August, more than 3,800 people walked over the border into the province, compared to the 2,996 who crossed throughout all of July.

Speaking prior to Montreal’s Pride Parade, Trudeau stressed that anyone seeking refugee status will have to go through Canada’s “rigorous” screening process.

He said the government is managing the unprecedented flow of predominantly Haitian asylum seekers and that all of them will be subjected to the usual security checks and evaluations before obtaining refugee status in Canada.

On Thursday, the federal government announced additional measures to deal with the influx of people.

Conservative immigration critic Michelle Rempel said Trudeau is downplaying the urgent need to deal with the surge in people crossing the border.

“They knew it was going to be a problem this summer. And their response has been building tent cities on the U.S./Canada border,” she said in an interview with CBC News.

In January, Trudeau tweeted: “To those fleeing persecution, terror and war, Canadians will welcome you, regardless of your faith. Diversity is our strength.”

Rempel said Trudeau’s statement was misleading and said he should make it more explicit that asylum seekers risk being deported to their country of origin if they enter Canada illegally.

She is also calling on government to boost funding for the Immigration and Refugee Board (IRB). Those seeking refugee status must have a hearing at the IRB, but even without this summer’s surge in asylum seekers, there are already backlogs, allowing people to stay in Canada while they wait for a hearing.

Rempel calls that an incentive for people to cross illegally into Canada, and argues increasing funding to the IRB would help curb that incentive. 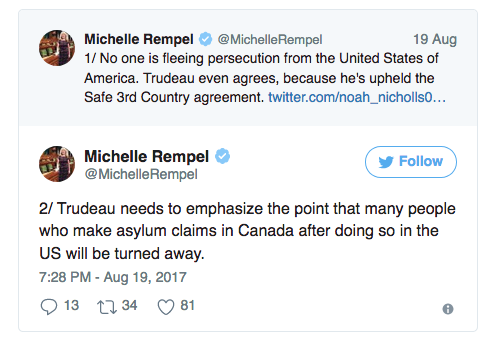