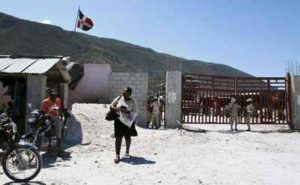 Drivers union leader Blas Peralta says about 50 truckers have joined the protest at the Jimani border crossing. The Dominican government says about half of the nation’s exports to Haiti pass through the crossing.

Blas says the drivers won’t go back into Haiti until the leaders of both countries can guarantee the safety of drivers. He says three drivers were kidnapped in Haiti over the past week while delivering cargo.

Union and government officials began meeting Friday seeking to bring an end to the protest.