Newly formed Tropical Storm Chantal is taking aim at the Caribbean this week.

The Atlantic Basin has been void of a tropical depression or storm since mid-June, until Sunday evening that is.

Tropical Storm Chantal developed in the Atlantic Ocean and is currently 470 miles east-southeast of Barbados.

The AccuWeather.com Hurricane Center has been keeping a close eye on this tropical system over the past few days as it has been moving from near Africa across the Atlantic Ocean. 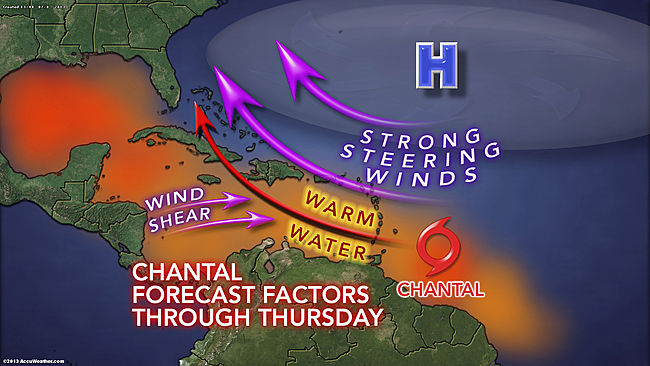 As the wave progressed westward over the weekend, it encountered warmer waters and light winds well above the sea surface. This helped it develop into what is now Tropical Storm Chantal.

The fast-forward motion of Chantal should hinder rapid intensification as it is expected to maintain its status as a tropical storm over the next several days.

Chantal will continue to track to the west and northwest through midweek, passing over the Windward and southern Leeward islands on Tuesday. The threat of flooding will accompany Chantal as it moves across these islands.

As Chantal moves into the eastern and central part of the Caribbean, there is a chance that warm waters will allow the system to reach Category 1 hurricane status.

By midweek, Chantal will encounter disruptive winds winds at the middle layer of the atmosphere. Winds of this sort tend to distort the structure of tropical systems and can lead to weakening. This potential weakening would occur around the same time that nears Hispaniola and eastern Cuba.

Even though the mountainous terrain of these islands should deter Chantal from strengthening, these islands may still be faced with the danger of flooding rain and mudslides at midweek. 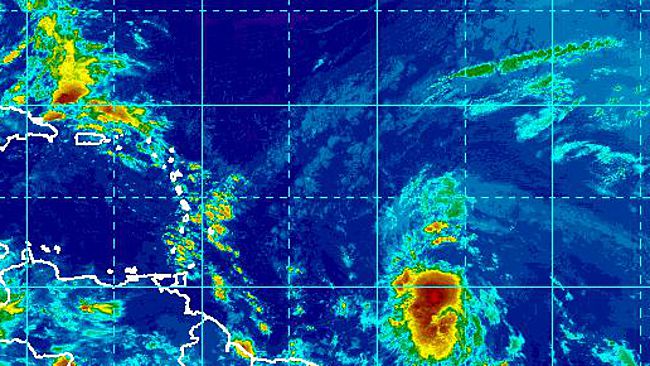 Later in the week, it is possible that Chantal, in a greatly weakened state, enhances the shower and thunderstorm activity across the Bahamas and part of the Florida Peninsula.

Over two weeks have passed since a tropical storm roamed the Atlantic Basin, when Tropical Storm Barry crossed from the northwestern Caribbean to the southwestern Gulf of Mexico.

Content of this story was contributed by AccuWeather.com Meteorologists Brian Lada and Alex Sosnowski. The thumbnail on the homepage and picture in this story is a satellite image of Tropical Storm Chantal, courtesy of NOAA.