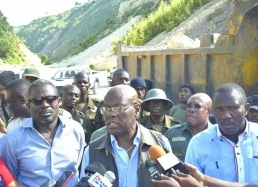 As part of the Decree of January 2006 laying down the conditions for the exploitation of quarries, an operation conducted by the Minister of the Environment Joseph Jouthe, together with the National Police of Haiti (PNH), the Justice and the Agency of the Protected Areas (ANAP) proceeded on December 6 at the closure of a quarry (sand, rocks, gravel…) at Thomassin 48, at the Thurin gully, in the Locality of Pilon.

Minister Jouthe thanked residents for informing the Ministry of illegal exploitation of this site, which is a danger to both the environment and the surrounding population. In addition, he pointed out that many environmental problems of downstream communes, such as Pétion-ville, Delmas and Port-au-Prince come from this place.

“This intervention is only the beginning of a series, with a view to stopping environmental degradation throughout the national territory, particularly in the Metropolitan area,” said the Minister, adding that this quarrir had already been subjet of the prohibition that the Ministry intends to enforce, recalling “Any contravener of this provision will be liable to arrest and severe penalties provided for in the law.”

Note that during this operation, 4 operators of materials in quarries, were arrested by the PNH and led to the Commissariat of Thomassin 48, for judicial follow-up.

Recall that a report of the Bureau of Mines and Energy (BME) concerning quarry operations across the country and the metropolitan area in particular indicates that out of 140 quarries identified in the West Department 89% of operators are illegal and do not have any state operating license https://www.haitilibre.com/en/news-22399-haiti-environment-89-of-quarries-are-illegal-in-the-west.html