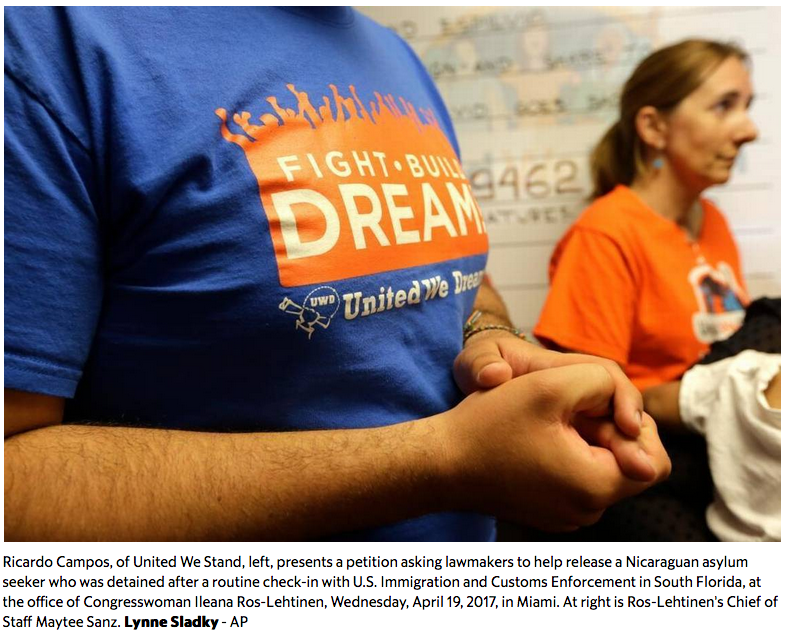 President Donald Trump’s top immigration official warned Hispanic members of Congress Wednesday that over a million people living in the United States under a special protected status could soon be placed in line for deportation.

Homeland Security Secretary John Kelly told members of the Congressional Hispanic Caucus that the fate of deferred action program known as DACA — Deferred Action for Childhood Arrivals — will likely be determined by the courts, perhaps as soon as September, and that attorneys he’s consulted with do not think the program is legally sustainable. Kelly also would not commit to extending temporary protected status, or TPS, for nationals from Honduras, El Salvador, Nicaragua and four other countries, but indicated that TPS for Haitians will likely end.

“I have never left a meeting so emotionally affected than from what I just heard inside,” said U.S. Rep. Luis Gutierrez, D-Ill., who estimated that millions of people could be deported. “And I’m positive that my colleagues heard the same thing that I heard.”

[READ MORE: Democratic leaders to secretly huddle over strategy to save DACA]

Kelly spent more than an hour in an emotional Capitol Hill meeting discussing DACA, TPS and other Trump administration concerns with the Democrats. It was a dramatic shift in tone for Kelly who in previous meetings has cast himself as someone who protected the program. Trump and Republican leaders have also repeatedly stated that the 800,000 immigrants currently protected by the DACA program shouldn’t be concerned.

I have never left a meeting so emotionally affected than from what I just heard inside.

The program not only shields from deportation young people brought into the country illegally as children by their undocumented parents, but it also allows them to attain work permits.

In February, Trump promised to treat the so-called Dreamers “with heart.”

“To me, it’s one of the most difficult subjects I have because you have these incredible kids — in many cases, not in all cases,” Trump said during a February news conference. “In some of the cases, they’re having DACA and they’re gang members and they’re drug members, too. But you have some absolutely incredible kids — I would say mostly — they were brought in here in such a way. It’s a very, very tough subject.”

That changed last month when a group of Republican state officials from 10 states, led by Texas Attorney General Ken Paxton, called on Trump to stop the controversial program put in place by President Obama in 2012.

Kelly said he personally supports the DACA program and would not rescind the program, but that he didn’t expect the administration to defend it in a court challenge. He pressed the group of Democratic lawmakers to work with Republicans to pass legislation that could provide a long-term solution.

Concerns that DACA could be eliminated are significant because of the Texas threat. The courts already struck down a similar policy proposal that would have expanded the eligible population via another program known as DAPA — Deferred Actions for Parents of Americans — that also lengthened the accompanying work permits to three years. Last year, the U.S. Supreme Court upheld the appellate court’s decision in a split decision.

Kelly rushed from the meeting without answering questions from the press. His security detail physically stopped several reporters from approaching the secretary as they sought to ask him about DACA as he walked down the hall.

But a Homeland Security spokesman said the secretary’s comments to the members of Congress were his personal observation and shouldn’t be interpreted as administration policy.

“From his point of view, in conversations he’s had with attorneys both inside and outside the department, that most of them felt that DACA as it exists, is not legally sustainable,” said David Lapan, DHS press secretary. “That was his personal observation.”

Recipients of the Deferred Action for Childhood Arrivals voice their concerns for the future of the policy that allows certain undocumented immigrants who entered the U.S. as minors to receive a renewable two-year period of deferred action from deportatio

But it’s strongest indication yet of the administration’s thinking on the future of DACA since the threat of the lawsuit.

This is not the first time, the Homeland Security chief has warned roughly 60,000 Haitians with protective status could soon be forced to return.

Kelly sent waves of fear throughout Haitian communities in Miami and across the United States last month when he said that it will ultimately be up to Congress to resolve the issue by changing the law.

“I have a law that I am supposed to enforce and I think the members of Congress who are interested in this, and there are a lot of them, should probably sit down and talk about it and come up with some legislation to fix it. I think it’s on them,” Kelly said in an interview with the Miami Herald last month.

TPS for Haitians was expected to expire this month, but Kelly decided in June to extend the status an additional six months to allow Haitians more time to prepare for the change. It will now expire in January unless it is extended again.

In conversations, he’s had with attorneys both inside and outside the department, most of them felt that DACA as it exists, is not legally sustainable.

The United States granted TPS to Haitian nationals living in the United States following the cataclysmic earthquake in 2010 that left more than 300,000 dead, 1.5 million homeless and an equal number injured. But while the country continues to suffer from extreme poverty, Kelly said Wednesday in the meeting with Democrats that conditions for which TPS was granted have largely been resolved.

“There is no doubt in mind that his characterization of temporary protective status for Haitians was coming to an end,” said Nanette Barragan, D-Calif, after listening to Kelly’s explanation.

Marleine Bastien, a leading figure in the Haitian community in Miami on TPS, accused the Trump administration of searching for any excuse to end protected status for Haitians.

“They are using the wrong argument on purpose because anybody who isn’t blind can see that Haiti has yet to recover,” said Bastien, executive director of Haitian Women in Miami. “We believe [the decision] is wrong.”

Homeland Security initially grants TPS for between six and 18 months, and can renew the status indefinitely if conditions remain unsafe or the country is unable to handle the return of its nationals. The renewals are a source of some controversy in the United States as some critics feel the benefits have basically become permanent since some nationals from Honduras and Nicaragua have held the status for roughly 20 years.

Thousands of Haitians still remain in camps seven years after the earthquake, Bastien said, and considerable damage remains from last year’s Hurricane Matthew along with a cholera epidemic introduced by U.N. peacekeepers 10 months after the quake.

“The Trump administration is being hypocritical and using deceit to justify their TPS termination,” she said. “It is wrong, it is immoral and not smart.”