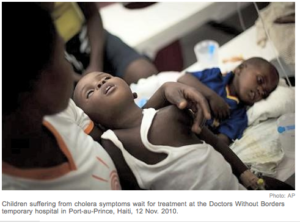 The United Nations has announced a new strategy designed to help support the government of Haiti’s response to a cholera epidemic.

In a statement Friday, the U.N. says Haiti’s cholera outbreak continues to spread, with more than 800 people dead and more than 12,000 hospitalized since the outbreak was first confirmed late last month.

The U.N. says the new response strategy includes projects from 42 non-governmental agencies, five U.N. agencies and the International Organization for Migration. Haiti’s Ministry of Public Health and Population would continue to lead the effort.

The strategy includes public outreach, rapid response, access to health services, and ensuring clean water, sanitation and waste management. To fund the effort, the U.N. is making an appeal for about $164 million in aid.

Ten cholera deaths have been confirmed in the capital, Port-au-Prince. Health workers fear an explosion of the disease in the crowded city, where hundreds of thousands of people have been living in squalid tent cities since January’s devastating earthquake.

The U.N. says the new response strategy includes projects from 42 non-governmental agencies, five U.N. agencies and the International Organization for Migration. Haiti’s Ministry of Public Health and Population would continue to lead the effort.

The United Nations anticipates as many as 200,000 people will show symptoms of cholera in Haiti, ranging from mild cases of diarrhea to the most severe dehydration.

The World Health Organization says the bacteria that causes cholera will be in the country for a number of years, and the goal is to reduce the public health impact of the outbreak. WHO spokesman Gregory Hartl says the current fatality rate of 6.5 percent is far higher than it should be.

The deputy director of the Pan American Health Organization, Dr. Jon Andrus, says Port-au-Prince is “ripe for the spread of cholera” because of the poor sanitary conditions. He predicted a large upsurge in the number of cases.

Haiti’s Health Ministry has said the vast majority of the deaths and hospitalizations have come in the more rural north and central provinces. The outbreak was first reported in the Artibonite region north of the capital.

After avoiding the thought of a Cholera outbreak, since February, the UN is now caught with its pants down. When Cholera erupted they had no material with which to fight it.

The epidemic has now accelerated to the point where our UN masters expect 200,000 infections, which probably means we will have substantially more than this total. Perhaps 500,000.

Things are rapidly accelerating towards disaster as hospitals are full to capacity and have closed their doors to new patients.

Fear and paranoia now sweep the countryside as people refuse to assist those who are infected. Tap Tap drivers refuse transportation.

Sick families will be left to die by neighbors afraid to help.

The results of this disaster will exceed those of the January 12 earthquake unless some immediate steps are taken.