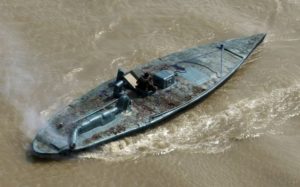 With three-quarters of potential cocaine shipments sliding under their noses, United States authorities are having a hard time keeping up with the Latin American drug cartels. Part of the problem, a new report in The New York Times says, is the fact that the famously daring and elusive drug-running submarines aren’t just operating in the Pacific Ocean any more. These diesel-powered vessels have taken the Caribbean by storm, and the technology powering them is getting more sophisticated.