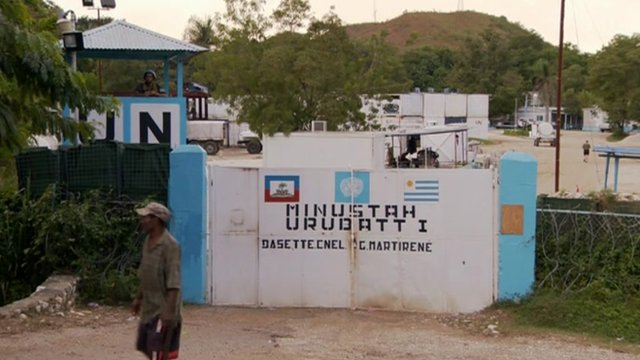 Today at 5:30p ET, our new Fault Lines “Haiti in the Time of Cholera” airs on Al Jazeera America. This episode, correspondent Sebastian Walker travels to Haiti and to the UN headquarters in New York to ask questions of accountability of Haiti’s Cholera epidemic.Here’s some background reading for the episode airs, and we will have more from the episode in the next two weeks with repeat airings and the Al Jazeera English premiere of this episode.

Our Fault Lines timeline of Haiti, the UN and Cholera.

March 2012 graphic from the New York Times on the spread of the Haiti Cholera epidemic.

UN Office for the Coordination of Humanitarian Affairs (OCHA)’s Haiti Cholera statistics from 2010 to May 2013 visualized, June 5, 2013.

The 58-page report, “Peacekeeping without Accountability,” provides the first comprehensive analysis of the cause of the massive outbreak of cholera in Haiti—which has killed more than 8,000 people and sickened more than 600,000 since it began in 2010. The report examines the role the U.N. played in precipitating the crisis and the U.N.’s responsibilities to provide legal remedies to victims of the epidemic. It directly contradicts recent statements by the U.N. Secretary-General that the organization did not bring cholera to Haiti, and has no legal responsibilities for the epidemic or its consequences.

“Why the UN Should Take Responsibility For Haiti’s Cholera Outbreak,” Celso Perez and Muneer I. Ahmad in The Atlantic, August 16, 2013.

Despite much evidence to the contrary, for nearly three years, the United Nations has categorically denied that it introduced cholera into Haiti after the country suffered a devastating earthquake in 2010. Since then, cholera has killed more than 8,000 people and infected more than 600,000, creating an ongoing epidemic. As new cases continue to emerge, and the UN’s legitimacy continues to erode, it is time for the organization to apologize and take responsibility for the consequences of its actions and its inaction.

In a new report, Peacekeeping Without Accountability, which was released Tuesday, members of the Transnational Development Clinic at Yale Law School (YLS) and the Global Health Justice Partnership, an initiative of YLS and the Yale School of Public Health, provide scientific evidence showing that the UN brought cholera to Haiti and argue that the organization’s refusal to hold itself accountable to the Haitian people is both immoral and illegal.

Mr. Nesirky pointedly ignored the editorial’s central focus, which is that the United Nations’ responsibility derives not only from its mission as a major humanitarian relief organization, but also from the growing body of evidence that the cholera outbreak originated with U.N. peacekeepers deployed to Haiti in 2010 following a devastating earthquake.

More than 100 years after the eradication of cholera in the island nation of Haiti, the disease has reemerged with a vengeance. A new study out of Yale University traces the outbreak back to an infected Nepalese disaster response team, dispatched by the UN in the aftermath of Haiti’s massive 2010 earthquake. Robert Siegel speaks with the study supervisor, Muneer Ahmad.  [AUDIO]

If a multinational corporation behaved the way the U.N. did in Haiti, it would be sued for stratospheric amounts of money. And that’s just for starters: Were Unilever or Coca-Cola responsible for a cholera outbreak that killed 8,000 people and infected 640,000 more, and for subsequently covering up its employees’ failure to adhere to basic sanitation standards, it is likely their executives would have difficulty visiting countries claiming universal legal jurisdiction.

ON JULY 5th the United Nations refused, again, to countenance the claims of 5,000 cholera-affected Haitians against it. The Haitians contend that grossly inadequate sanitation at a UN peacekeeping base introduced and spread the disease through the country’s waterways. The great weight of scientific evidence is on their side. The claimants seek millions of dollars in damages, installation of a sanitation network, and an apology.

In a letter to members of the United States Congress who had urged the UN to take responsibility for the cholera outbreak, Ban Ki Moon, the UN’s secretary-general, reiterated that the UN’s legal office has decided the claims are “not receivable” because of the UN’s privileges and immunities. The UN has offered little insight into its reasoning, except that consideration of the claims would involve a review of “political and policy matters”. That statement has only raised more questions, including whether “dumping disease-laden waste water in rivers is UN policy,” as a reporter asked at a press briefing last week.

“If any country was a mine-shaft canary for the reintroduction of cholera, it was Haiti — and we knew it. And in retrospect, more should have been done to prepare for cholera … which can spread like wildfire in Haiti. … This was a big rebuke to all of us working in public health and health care in Haiti.” [AUDIO]