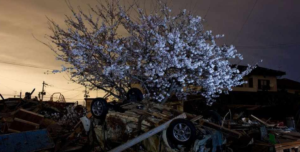 When the massive earthquake rocked Haiti in Jan. 2010, Americans opened their pocket books, but after taking a short ride down any rocky road in the country now, you will see there is a long road ahead for Haiti’s children.

You don’t have to look far to find devastation in Haiti. It finds you. In the middle of the guns and grittiness, there are many children.

“It’s really hard because we lost everything,” said orphanage director Kalebe Augustin. “We lost … I can say … everything. Everything.”

After the earthquake, one particular orphanage became home to more children. Since then little else has changed and the orphanage has become overcrowded.

The orphans share smiles freely and sing songs to keep spirits alive. The live in an environment most would find difficult to be grateful for. Toddlers clamor to be held, stifling hot plywood buildings house the 60 children and meals are cooked in an open-air kitchen with a tarp for a roof.

“God save my life,” Augustin said. “That’s the reason and when I pray, I say ‘Thank you to God for saving my life and you have a project for me to take care of the kids for you.’ That’s the reason I knew he saved my life.”

At another nearby orphanage, parents have abandoned their special needs children since the earthquake in front of the front gates of the building.

The memory of a young special needs boy thrown over the 20-foot wall surrounding the home haunts the staff.

Other children still with their parents live in tent cities, which have grown in number, luring in more people with the luxury of food and sometimes clean drinking water.

Night after night a mother and daughter share this small tent.

Mary Jeudy, a Haitian nurse who trains others in basic nursing, administers medical  care for people in the tent cities. With unemployment hovering at 40 percent, she says parents struggle to take care of themselves much less their children.

“They’re willing to work and there’s no work,” Jeudy said “Sometimes we have to share what we have to eat with them until they find a little something.”

Haiti may be the  most materially  poor  country in the western hemisphere, however it continues to be rich with pride.

“Even though you go hungry you don’t have to be dirty,” Jeudy said.

Evidence of this is at the local churches. A little boy is seen wearing a suit. In schools, neatly dressed children carry on after having lost so much to the earthquake.

Many say the long term solution to Haiti’s problems hinges on education and jobs. For now, children cling to short term solutions and to each other, living one day and $1 at a time.