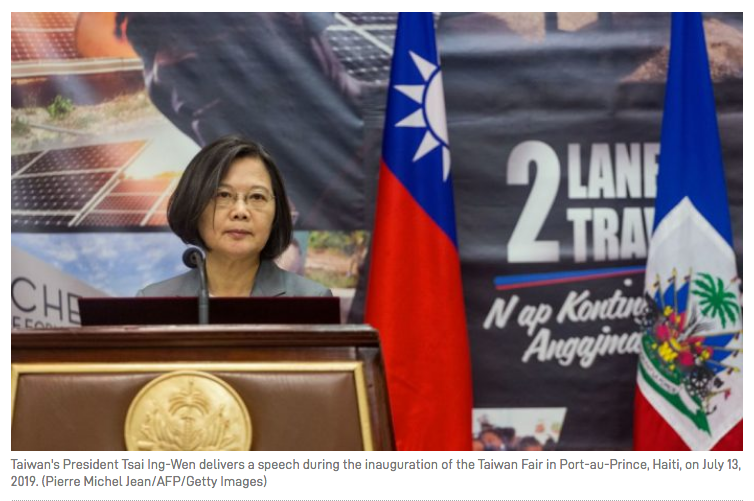 TAIPEI, Taiwan—President Tsai Ing-wenreturned to Taiwan on July 22, after a 12-day trip to Taiwan’s four diplomatic allies in the Caribbean, with stopovers in New York City and Denver.

Tsai left Taiwan on July 11 to visit Haiti, St. Christopher and Nevis, St. Vincent and the Grenadines, and St. Lucia. Before arriving in Haiti, Tsai spent two days in New York City as a stopover. On her return journey, after visiting St. Lucia, she stopped over in Denver on July 20 and 21.

At a pressconference in Denver just before her departure, Tsai said that “Taiwan enjoys bipartisan support in the United States, in both the executive and legislative branches, and among the general public, as well.”

She also touched upon the issue of bilateral relations with the United States in her pressconference at the Taoyuan airport in Taiwan upon her arrival. She said her extensive stay in the United States allowed her to exchange ideas with Taiwan supporters in U.S. political and academic circles, as well as those from think tanks, research institutions, and corporations.

“Some people say this is a sign of an improved relationship [with the United States]. But I must say it is more appropriate to say [the ties] have ‘deepened,’” Tsai said.

That relationship is critical to Taiwan’s national security, as the United States is the island’s main arms supplier.

Its cross-strait neighbor, China, views Taiwan as a renegade province that must be united with the mainland, with military force if necessary—despite the fact that the island is a de-facto country with its own constitution, military, elected officials, and currency. Hence, the United States has consistently provided arms for Taiwan’s self-defense.

Taiwan’s Central News Agency (CNA), in a commentary published on July 21, said that Tsai’s latest trip achieved several precedents. The four-day U.S. stopover was the longest ever by a visiting Taiwan president, and it was the first time that a Taiwan president visited Denver. Tsai also, for the first time, held a public event at Taiwan’s de-facto embassy in New York City.

Dong Li-wen, a researcher with Taiwan Think Tank, said the events show that the Taiwan-U.S. relationship has greatly improved, according to CNA.

Ding Shuh-fan, an emeritus professor at the National Chengchi University, said that it was unfortunate that Tsai didn’t meet with any high-ranking U.S. administration officials, according to CNA.