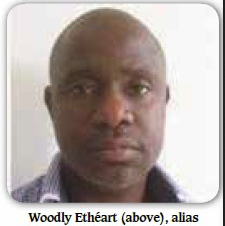 A Port-au-Prince restaurateur suspected of kidnapping another prominent businessman was arrested by Haitian police Thursday after turning himself into a judge.

Woodly Ethéard, aka Sonson Lafamilia, was transported to a jail in Croix-des-Bouquets, a suburb on the outskirts of the capital. He has not yet been charged, said his attorney Claudy Gassant.

But the long-awaited resurfacing of Ethéard, who went underground after authorities launched a nationwide manhunt for his arrest, was quickly eclipsed by another turn of events just south of the capital. Opposition Senator Moise Jean-Charles accused the government of trying to make an illegal arrest after heavily armed and undercover cops stopped his Nissan Patrol in the town of Gressier.

Under Haitian law, elected officials have immunity and their private property cannot be searched. The senator and police spent more than an hour in a standoff as local radio reported the ongoing events, and Jean-Charles gave interviews as backup units arrived. Sources say police had an arrest warrant for one of five passengers traveling with the senator inside the vehicle.

As Jean-Charles was denouncing the traffic stop and Haitian President Michel Martelly’s government, Martelly was making his Haiti investment pitch to a roomful of well-groomed Haitian and Haitian-American businessmen attending an economic forum in Petionville, sponsored by the Haitian-American Chamber of Commerce. The goal of the event was to help boost investments in Haiti where political tensions and fragile stability, and a high kidnapping rate in the past, have frightened away potential investors.

Aware of the kidnapping problem, the government last year began cracking down, boasting earlier this year that kidnappings were becoming a thing of the past. And then prominent businessman Sami El Azzi got kidnapped, and one of his captors pointed the finger at Ethéard.

The shocking accusation threw a curve ball at the administration, which in 2013 saw a 53 percent drop in kidnappings compared with 2012.

Ethéard and his wife, Marita Isna Mazil Ethéard are the owners of La Souvenance, a popular, restaurant in tony Petionville. But Haitian authorities also alleged that the well-known businessman also is head of a gang called the Galil that was behind El Azzi’s Feb. 17 kidnapping as he was driving home from work.

According to a report by the National Defense Human Rights Defense Network, six hooded individuals carrying guns and identifying themselves as police forced El Azzi into a Toyota Land Cruiser with government license plates. They later demanded a $1.2 million ransom for his release.

The case has captivated Haitians for months as authorities privately vowed to bring Ethéard in despite his alleged close ties to some in power. While he was in hiding, an investigative judge closed the restaurant and had his wife arrested. But Marita Isna Mazil Ethéard was later released on order of a prosecutor unbeknown to the judge. The prosecutor later resigned amid public outcry.

Gassant, who denied the allegations against his client, said he voluntarily turned himself in because “he has nothing to hide.”

“They keep accusing him of all kinds of things. He is at the disposal of the law to answer questions and we will let a judge decide his fate,” Gassant said.