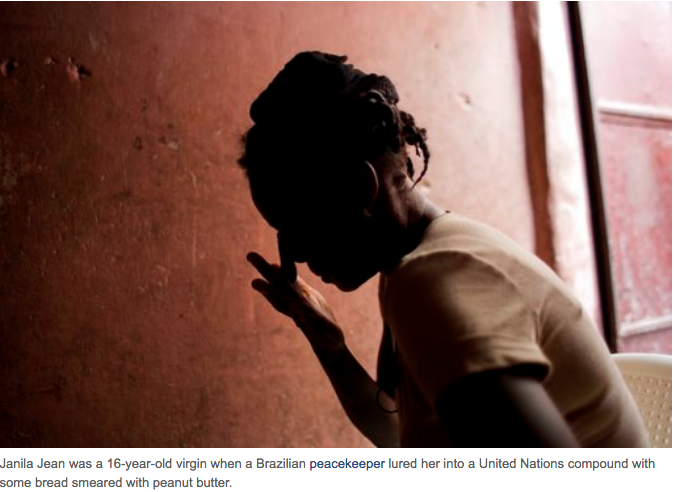 The AP reported United Nations data stating that there were 150 allegations of abuse and exploitation by United Nations personnel in Haiti between 2004 and 2016, out of the worldwide total of almost 2,000, with victimizers also coming from Bangladesh, Brazil, Jordan, Nigeria and Pakistan. These included 300 cases involving children by personnel from 23 countries.
US Ambassador to the UN Nikki Haley urged all countries that send troops to UN peacekeeping mission to punish soldiers who commit sexual abuse and exploitation, citing the abuse by Sri Lankan soldiers. The AP report states that “only a fraction of the alleged perpetrators served jail time”.
The US ambassador quoted a recent report by the Associated Press news agency on a sex ring allegedly run by Sri Lankan peacekeepers who lured hungry teenage boys and girls by offering them snacks and cookies.
The mission has been accused of sexual abuse and blamed for the cholera outbreak as the country was free of cholera until 2010 when peacekeepers dumped infected sewage into a river. In late March, the council reduced the size of its peacekeeping mission in the Democratic Republic of Congo, bringing the ceiling down from 19,815 troops to 16,215. She said he often showed her a picture of his wife. In response to the AP’s investigation, the head of the United Nations office that oversees the conduct of peacekeepers said Wednesday that progress was being made with member states to hold perpetrators accountable and to get victims help. In the wake of the report, 114 peacekeepers were sent home. The U.N. stabilization mission, known as MINUSTAH, was deployed to Haiti in June 2004. During her interview with investigators, another young victim, V07, received a phone call from a Sri Lankan peacekeeper. The peacekeepers used the children for sex and gave them food and money as payment.
“One boy was gang-raped in 2011 by peacekeepers who disgustingly filmed it on a cell phone”, said Haley following Thursday’s vote. The MINUSTAH peacekeeping mission, which has been in the country since the 2004 ouster of then-President Jean-Bertrand Aristide, is deeply unpopular with Haitians and has been dogged by controversies. Some of the peacekeepers in the Sri Lankan contingent were based near the former resort. Also by the text, the new mission would be headed by a Special Representative of the Secretary-General, who would also play a “good-offices and advocacy role at the political level to ensure full implementation of the mandate”, the United Nations said.