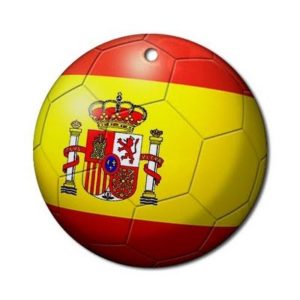 Spain will meet Haiti in a friendly Saturday in preparation for the Confederations Cup, but the Spaniards plan to enjoy their time in Miami as well by attending the NBA Finals.

Reigning World Cup and European champion Spain plays Haiti on Saturday at Sun Life Stadium as part of Spain’s preparation for the FIFA Confederations Cup, which will be held in June in Brazil.

Even though it is an exhibition match, some of Spain’s best players landed in Miami on Tuesday night. The Confederations Cup is far from the world’s most prestigious tournament, but it will be a test for the Spaniards, the defending World Cup champions.

But the 23 Spanish players will also have time for fun.

The entire team has been invited to watch Thursday’s Game 1 of the NBA Finals between the Miami Heat and San Antonio Spurs from a luxury box at American Airlines Arena.

The players were very excited about the chance to see the game once they knew that the Heat had qualified for the finals, said Nacho Terra, a communications manager for Spanish bank BBVA, one of the NBA’s sponsors.

Andrés Iniesta, who scored the winning goal in the 2010 World Cup, said that it will be a very special moment.

“The best players in the world will be playing in the NBA Finals, and among soccer players there is a lot of interest in basketball, so we hope to make the most of it.”

Some 50 fans received the Spanish team at Miami International Airport. The team is staying at the Mandarin Oriental hotel in Miami, where some young fans clad in the red jerseys of “La Roja” were hanging around the lobby to get autographs.

Spain coach Vicente del Bosque said he was aware of the attention his team will draw in South Florida, but also acknowledged the presence of thousands of Haitian supporters in Miami.

“We have not had much contact yet with the town but we have been told that there is a lot of animation,” Del Bosque said.

“The Grenadiers” — as the Haitian national team is also known — arrived last Monday in Miami and are training at Barry University.

Martinez, a defender with Champions League winner Bayern Munich, said Haiti is very well prepared physically “It will be a great training and a great game.”

Martinez said the friendly will help Spain reach “the maximum level of performance at the Confederations Cup.”

Spain will play a second friendly against Ireland in New York on Tuesday.

Spain has never won a Confederations Cup, which takes place every four years and features the reigning champions of the six confederations that make up FIFA.

Saturday’s tickets start at $29 and a limited number of VIP field seats will be made available on the sidelines to watch the match.

Some of the ticket proceeds will be donated to Project Phoenix, which will help aid Haiti’s redevelopment following the massive 2010 earthquake, and to fund a stadium in Cite Soleil, an impoverished area in Port-au-Prince.