“I’ve seen good intentions among the NGOs,” Daniel Tillias said of the thousands of foreign non-governmental organizations that work in his home country of Haiti — so many that some Haitians refer to their country as the “NGO Republic of Haiti.” “I cannot imagine they would come here with the desire to create a big mess,” he said.

Tillias has a different conception of what will truly help his native Haiti rise from years of hardship. He’s a believer in homegrown recovery efforts, run and staffed by locals.

Through the Sakala Foundation, Tillias runs an urban farm in Cité Soleil, one of the poorest communities in Haiti, in the Port au Prince metropolitan area.

It’s only half an acre, but it’s the largest urban garden in the entire country. Built on a former landfill, the farm employs youth exclusively from Cité Soleil. 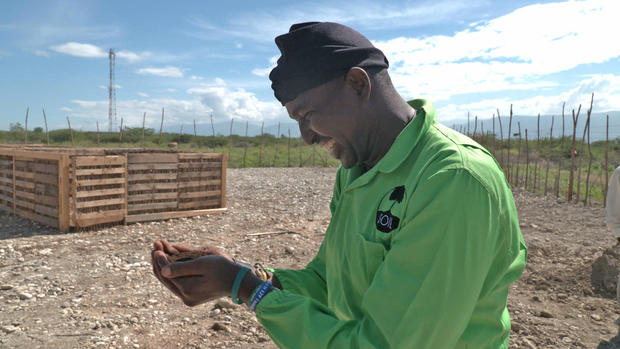 Daniel Tillias holds compost, created in part from human waste, for local farmers to use in Haiti.

The garden grows trees and produce in plots made from recycled tires. These tires “could be burning in the street, but are now being used to grow food, but also grow new mindset, new mentality, and a new path for this country,” Tillias said.

The community leader sees the farm as a training ground for young Haitians to understand the art and science of farming in order to contribute meaningfully, as adults, to Haiti’s agricultural sector.

The interest is there. Recently, the Sakala Foundation saw 500 young people clamor for 60 spots in two classes in welding and agriculture, Tillias said. The organization hopes to expand gradually to meet this demand.

“We are sometimes marginalized or neglected,” Tillias said of Haitians. “We would use our hands to grow a green coast as it used to be in the past.” 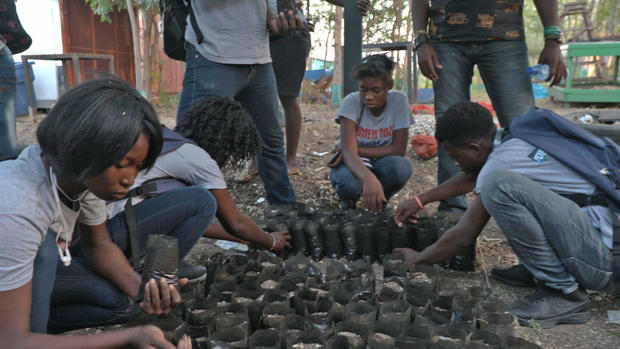 A fundamental flaw Tillias sees in foreign NGOs in Haiti is that most of these organizations are not “Haiti-oriented.”

“Haitians can do way more, better than the NGOs that are coming down. People actually want to work really hard, but they need the opportunity,” Tillias said.

Two of Tillias’s former students are already making that vision a reality. They now work for a local NGO that turns human waste into compost to help dozens of local farmers.

“What is good about this is it’s not like someone from far away coming to tell people in the community what’s good for you. It’s actual people that they grew up with — that they know, they trust,” he said.