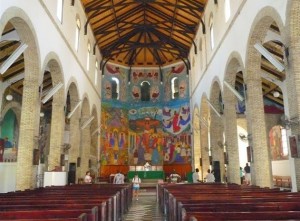 WASHINGTON — A renowned boys’ choir from Haiti will perform this week at the Smithsonian’s National Museum of African Art.

Les Petits Chanteurs (The Little Singers) from the Holy Trinity Episcopal Cathedral Music School of Port-au-Prince, Haiti, is performing Thursday at 12 p.m. The concert will be held in a garden between Independence Avenue and the Smithsonian Castle.

The Holy Trinity Cathedral complex was destroyed in Haiti’s 2010 earthquake. Before the disaster, the music school served more than 1,000 students.

The boys’ choir is on a national tour to help raise support for rebuilding the school, which depends on charitable support. The boys range in age from 8 to 18.

The choir has performed in the United States before at the Kennedy Center in Washington, at New York’s Lincoln Center and elsewhere.