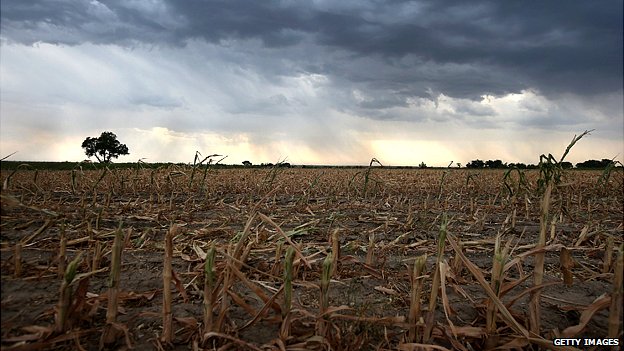 Constant craving: Global water demand is projected to increase by 55% between 2000 and 2050 – without new technology, drought-ravaged fields of crops like this one in Colorado will become more common

Ever since Archimedes invented his screw for drawing water uphill and the Romans built their famous aqueducts, mankind has tried to manipulate the earth’s most precious resource through the use of technology. Many have dreamed about making the deserts bloom.

Now, with the global population topping seven billion and demand for water set to increase to unprecedented levels, new technologies are helping us make smarter use of this finite essential for life.

According to the OECD Environmental Outlook to 2050, global water demand is projected to increase by 55% between 2000 and 2050, by which time more than 40% of the global population may be under severe water stress.

Put starkly: when there is not enough water to go around, famine, war and death are never far behind. But according to the World Bank we lose about 50 billion cubic metres of water a year through leaks and bursts alone.

This is something TaKaDu, based in Yehud, Israel, is addressing with big data analytics cloud-based software.

It processes data supplied by sensors and meters dotted around a water company’s supply network, and combines this with information such as domestic and industrial water usage patterns and weather, to build a sophisticated picture of how the network is behaving.

“We built a very smart algorithm that can spot anomalies in the network’s behaviour, from a small leak to a burst water main, enabling water utilities to plan and react much faster than before. And when you save water you save energy.” 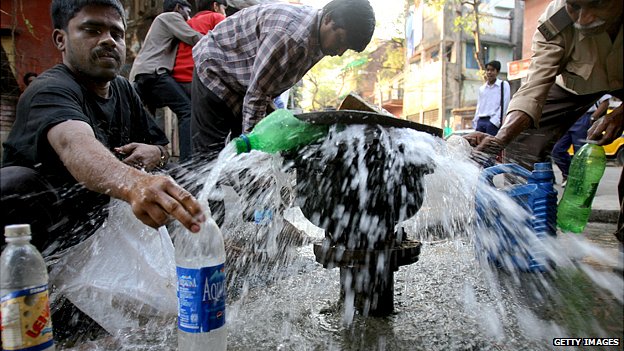 Mr Tamir says a Portuguese client saved one million euros in 2012 after TaKaDu’s software helped it reduce water lost through leakage – known as non-revenue water (NRW) – from 25.2% to 17.2% in a year.

Even a very efficient water network will experience about 10% NRW, says Mr Tamir. Inefficient ones with lots of leaks, unauthorised siphoning and poor monitoring can see this rise to 50%.

“Our software can tell utilities where to concentrate their efforts and even identify meters that are less reliable than others,” he says.

The problem is that the water industry is incredibly conservative”

In countries such as India, water networks – where they exist at all – can be spread over wide areas. Data collection often has to be done manually.

Upgrading to meters that transmit data wirelessly, powered by turbines inside the water pipes, could save millions of dollars, Mr Tamir believes.

According to research, the latest smart water networks could save the industry $12.5bn (£8bn) a year.

“There has been a big increase in the number of companies offering IT-based products aimed at helping businesses and farmers use more water more efficiently,” says Ian Elkins, editor of Global Water Intelligence, a business research organisation.

“The problem is that the water industry is incredibly conservative. There is plenty of innovation going on, but it generally takes about seven years for a start-up to reach a commercially sustainable position.”

With about 70% of the world’s fresh water supply being used for agricultural irrigation, and global demand for food rising inexorably, there is huge scope – and need – for technological innovation. 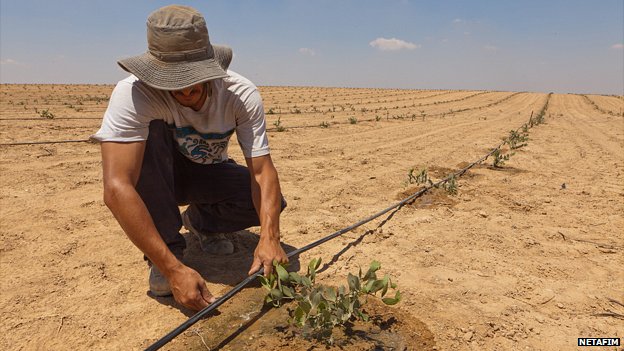 Drip irrigation technology like this, at the Hatzerim jojoba plantation in Israel, really can make the desert bloom

Now more than 10 million hectares of farmland are irrigated using drip irrigation techniques designed to use less water, more efficiently. Crop yields can be increased by 15% to 40%.

While the concept of drip irrigation has been around since the Persians, the technology has advanced markedly. 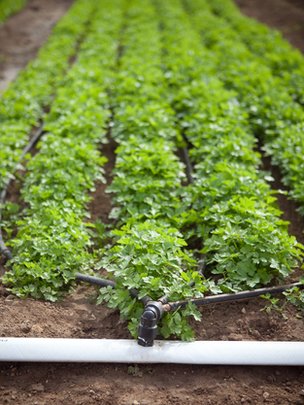 Almost all aspects of crop planning, planting, growth and harvesting can be controlled using software linked to these systems.

This is helping to reduce agricultural water usage by as much as 80% in some cases.

As a result, Netafim chief executive Igal Aisenberg expects the amount of agricultural land watered by drip irrigation to rise from 5% to 25% over the next 10 years. But why is it still only 5%?

Ari Schweitzer, Netafim’s chief technology officer says: “Drip irrigation is more expensive than other systems – roughly $1,000 to $3,000 per hectare – and is perceived to be more complex. And as we know farmers are a conservative lot. But return on investment can be as low as one year.

“Our strategy today is to reduce cost and complexity so that our technology can be available to every farmer around the world.”

Other companies blazing a trail in the growing “smart irrigation” sector include HydroPoint Data Systems, based in Petaluma, California.

Put simply, if there’s just been a downpour, you don’t need to waste money watering the golf course. Some of HydroPoint’s commercial clients claim 60% water reduction after using the system.

Big business certainly has a financial interest in reducing its water usage.

Global food and drink giant Pepsico, whose brands include Pepsi, Gatorade, Tropicana and Frito Lay, makes about $66bn in annual sales and uses about 100 billion litres of water a year to make its drinks and potato snacks. 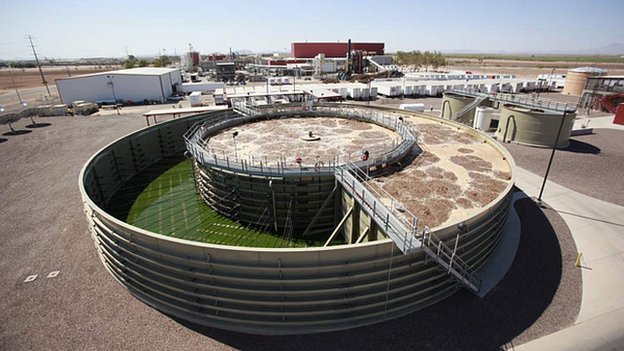 Pepsico is recycling up to 75% of its water at the Frito Lay plant in Casa Grande, Arizona

Dan Bena, the company’s senior director of sustainable development, told the BBC: “In 2012 we managed to reduce our water consumption by 14 billion litres, saving us $15m. We met our 20% water reduction goal four years early in 2011.”

Using membrane bio reactor and reverse osmosis technology in its Frito Lay plant in Casa Grande, Arizona, the company is now recycling up to 75% of its water supply and filtering it to drinking water standards.

At its British Walkers Crisps plant in Leicester, the water escaping as steam from potatoes being turned into crisps is captured and re-used, while Gatorade bottles are now regularly cleaned with high-pressure air rather than water.

And drip-irrigation techniques in China, the world’s biggest potato producer, have helped increase yields by 16% while reducing water usage by 40% at one Frito Lay farm. 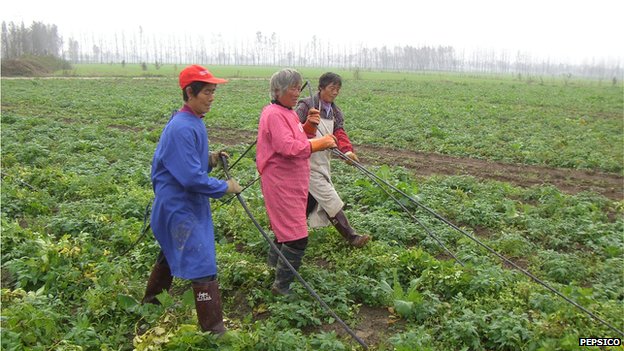 “We believe in getting more crop per drop”, says Mr Bena.

The problem with water is unlike energy sources, there is no alternative.

It is difficult to transport, expensive to treat, and extracting drinking water from sea water takes vast amounts of energy. This is why water has traditionally lagged behind in the cleantech investment stakes, says Global Water Intelligence’s Ian Elkins.

In 2012, just 5.4% of the $6.5bn venture capital invested in the cleantech sector went towards water technology projects, according to US research company Cleantech Group.

While progress is clearly being made, this investment trickle will have to turn into a flood if technology is to answer the world’s pressing water scarcity issues.