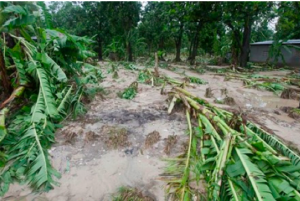 Lochard said the rains, which had also forced the cancellation of several flights to Cap Haitien, were responsible for a wall collapsing on a house in Fontamara killing three children ages six to 10 years.

The children’s mother was also injured during the incident.

In the north, three other people were killed. The authorities said the body of Danielle Saint-Hilaire was found on Monday while 40-year-old Exza Jean-Baptiste, was electrocuted in the community of Limonade.

The authorities also found the body of 64-year-old Jaccius Saingulier.

They said the extent of the damage in areas such as Limonade, Cap-Haïtien, Grande-Rivière-du-Nord, Limbé, Petite-Ance and Fort Saint-Michel, has not yet been finalised, but initial reports said that at least 2,000 houses have been flooded and some destroyed.