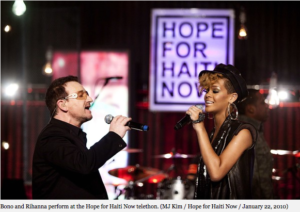 Programs like Friday’s “Hope for Haiti Now: A Global Benefit for Earthquake Relief” do not exist to further musical careers, introduce new material or birth fruitful collaborations. Tragedies like last week’s seismic disaster necessitate such urgent media efforts, and fundraising is their primary objective. Important information may also be transmitted; perhaps someone’s consciousness will be raised. The pleasure, surprise or release that art can offer is merely added value.

That said, several of the major names who came on board for Haiti went beyond the expected heartstring tugs. Many delivered on precisely that front: The evening was full of big ballads and classic laments, from the opening “Prelude To a Kiss” by Alicia Keys to Jennifer Hudson’s “Let It Be” and Stevie Wonder’s “Bridge Over Troubled Water.”

Others did something different. They made song choices or delivered performances that subtly enhanced our understanding of incomprehensible events.

The most newsworthy performance was the debut of “Stranded,” a collaboration between Bono and the Edge of U2, and Rihanna and Jay-Z. The song is part atmospheric film-noir pop recalling U2’s previous side project, “Passengers,” and part menacing rap. Rihanna had the least to do, but Bono let her lead on the choruses.

Before discussing those outstanding musical moments, let’s talk about Haiti.

The telethon’s producers made sure the island nation remained front and center. The night’s spoken interludes generated compassion by focusing on individuals.

At first, viewers may have been intrigued by chance to pledge to such celebrity phone bankers as Julia Roberts and Halle Berry. But when those famous names spoke, they uttered other names — belonging to Haitians who’d been injured, lost loved ones or simply survived the horrific tremors.

I suspect that Sting, Shakira, Beyonce, Christina Aguilera, Bruce Springsteen and Coldplay — all of whom gave respectable-to-great performances — would happily be overshadowed by Haiti’s survivors. Sheryl Crow, Keith Urban and Kid Rock, collaborating on Bill Withers’ “Lean on Me,” let the song’s simple sentiments speak.

But what will be remembered from this momentous occasion, if anyone looks back on it as an artistic event?

The first stunning turn came from Mary J. Blige. Pouring fervor into Stephen Foster’s “Hard Times Come Again No More,” the hip-hop soul queen showed how a standard could be conquered anew. John Legend did something similar with an expansive version of the spiritual “Sometimes I Feel Like a Motherless Child.”

Justin Timberlake, duetting with singer-songwriter Matt Morris, triumphed by reworking Leonard Cohen’s “Hallelujah.” Playing piano and singing in a hushed voice, he turned the ballad, so often kneaded to death by its interpreters, into a somber kaddish.

Madonna also offered a prayer — her own “Like a Prayer,” perfectly appropriate for the occasion, considering the famous video for the song, which had her embracing an actor depicting the Caribbean saint Martin de Porres.

The most notable performances, though, came from one point seemingly very far away from Haiti, and one very close by. The latter introduced many American viewers to the Haitian-born artist Emeline Michel; her version of Jimmy Cliff’s “Many Rivers to Cross” was plain-spoken and urgent.

And then there was the unexpected pairing of Neil Young and Dave Matthews. Strumming guitars, the pair sang a spectral version of the Hank Williams song “Alone and Forsaken” that forced listeners to acknowledge the depth of pain in Haiti that no amount of charity can heal.

Finally, Wyclef Jean, whose work in his native country is making him pop’s face of Haiti, performed the reggae hymn “Rivers of Babylon.”

In the middle of the song, he invoked the drums — dancing to the African polyrhythms that most of the night’s music lacked. With that gesture, Jean took everyone back to Haiti, the vibrant Haiti that lived before the earthquake, and which will somehow survive.