Leafing through Leah Gordon’s book of bewildering, disturbing and thrilling black-and-white photos, one stands out. Two boys stand before the camera, each wearing rough eyemasks, their naked upper bodies smeared with something grim-looking, large horns bound to their heads and rope in their hands. They look, to be frank, terrifying.

The photo was taken in Haiti, at the Mardi Gras carnival of Jacmel, a port on the south coast, and at first glance it plays up to the country’s voodoo clichés; but look a little closer – the boys seem at ease, proud even, to pose for their portrait. That they do so is down to the dedication of Gordon, a 51-year-old British photographer. For 15 years, Gordon has been plunging herself into the rich, weird world of the Jacmel carnival and returning with images such as this and many more, which feature in her new book Kanaval: Vodou, Politics and Revolution on the Streets of Haiti.

For those of us unfamiliar with either its medieval European origins or its altogether different manifestations in the further reaches of Latin and South America, the word “carnival” evokes dancing policemen on the streets of Notting Hill, or the flamboyant, technicolour parades of Rio de Janeiro. But the carnival (or “kanaval” in Haiti’s native creole) of Jacmel is quite radically different: a spontaneous, popular and mysterious mixture of theatre and masquing, voodoo and history that reaches a climax in this former French colonial port on Shrove Tuesday, or Mardi Gras. ‘

For a few wild days, boys and men career round the crumbling, picturesque by-ways of

Jacmel, often in marauding groups, wearing home-made costumes or in sinister, eye- popping drag. Some outfits have meanings that extend back centuries, others are entirely idiosyncratic and personal to their creators. It is no mere street party, then, but rather a carnival by and for the largely impoverished people of Jacmel, which tells, in its own way, the tumultuous history of Haiti, from the slave rebellion that freed the country from its French masters in 1804 to this year’s catastrophic earthquake, via the bloody dictatorships of the Duvaliers and much else besides. 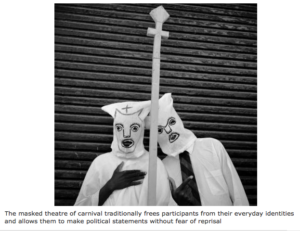 And for her introduction to this intoxicating brew, Gordon has Jill Dando to thank. In 1991, Gordon was watching a Holiday programme sequence about the Dominican Republic: “Suddenly [Dando] said, straight to camera, ‘I must warn you the Dominican Republic shares the island with another country called Haiti – do not go there by mistake, because Haiti is a country of dictatorships, military coups, death, black magic and voodoo.’ I thought, all that and hot weather? Within a month I was on a plane to Port au Prince.” She discovered the Jacmel carnival in 1995, and has been photographing it ever since; but it wasn’t until 2003 that she decided to learn more about its traditions and participants.

The result is the book, which mixes photography, several essays by other contributors and 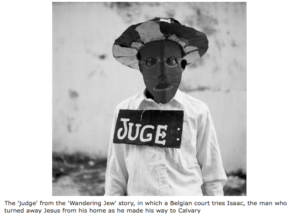 the oral histories of carnival participants, which Gordon herself recorded. And it is in these brief interviews that Gordon affords a glimpse into the extraordinary world of Jacmel carnival. Salnave Raphael, for instance, is one of the Lanse Kod (a Creole rendering of “lanceurs de corde” or “lassoists”), described above, who roam the streets with their ropes and horns. “We are making a statement about slavery, and being freed from slavery,” he tells Gordon in his account. “The cords we carry are the cords that were used to bind us. The blackness of our skin is made with pot-black crushed charcoal, cane spirit and cane syrup mixed with water. [On] the streets we stop at the first crossroads and at the blow of my whistle we all start doing push-ups, to show that though the slaves suffered they are still very strong. We wear the horns to look even more frightening… in carnival people like to be scared.” 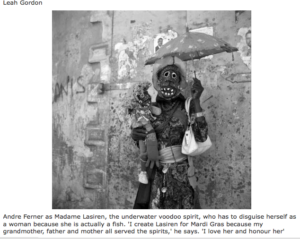 The Lanse Kod vie for pre-eminence with other large, equally striking groups such as the Zel Maturin, who enact a battle between St Michel and various spectacularly dressed and bewinged devils, both Christian and voodoo, for the souls of the faithful. Yet perhaps the most bewitching figures are the lone performers, such as Andre Ferner, who appears as Madame Lasiren. Lasiren is a voodoo marine spirit whom Ferner and his ancestors have honoured for generations. “The baby I carry in my arms is the child of Lasiren, who is called Marie Rose… Because Lasiren is a fish,” says Ferner, “she has to disguise herself as a woman to be at Mardi Gras. Each year I change the disguise and fashion a new baby. To get inspiration, I go to the place where the big beasts live, and they instruct me to do Mardi Gras. I have been doing this for 18 years.”

“I really like Madame Lasiren because [Ferner] is just an old-fashioned Haitian spiritual voodooist,” says Gordon, who believes that for many of its participants, carnival isn’t just the highlight of their year, it’s the source of their social status. “I never asked what their jobs were. It’s a difficult question in Haiti, because so many people don’t do anything. You don’t really get judged so much by what your job is, and that’s why things like carnival and creativity are so important.”

Other characters which appear equally obscure are in fact pointedly satirical. Until his recent 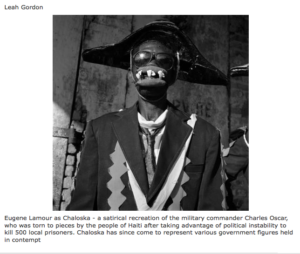 death, Eugene Lamour played a character called Chaloska, in a bicorn hat, with grotesquely enlarged lips and teeth. The name refers to Charles Oscar, a notoriously murderous Jacmel police chief lynched in the early 20th century. Lamour first took him on to the streets in 1962, coinciding with the autocratic outrages of President François “Papa Doc” Duvalier. Ever since, the presence of Chaloska in carnival has coincided with popular disgust at certain corrupt figures in the Haitian establishment.

Political commentary, voodoo street theatre, religious pageantry – Jacmel carnival has been juggling these myriad roles for two centuries. But whether it can survive in the form so vividly captured by Gordon is in doubt. Already there is pressure to introduce parades and more music, which, according to Gordon, is largely an attempt to control and commercialise the event, with sponsorship, and licensed food and drink concessions. Jacmel carnival is unusual because, unlike other Haitian carnivals, it has so far resisted this fate.

As for the devastating earthquake of January this year, Gordon is consoled that none of her oral-history subjects was killed; nonetheless, she worries how much of the town’s evocative but vulnerable architecture has survived : “What happens to all that history and memory when the buildings collapse?” Instead of carnival in February this year, there was a muted procession to the town’s cemetery. Next year, says Gordon, there will definitely be a carnival in Jacmel. “People keep asking me if these [people] that I worked with are going to start doing earthquake-related work, but it doesn’t really interest them. It sort of interests the outside world more,” she says. “Haitians tend to laugh at crises; not in a horrible way – but they’ve had a lot of them.”