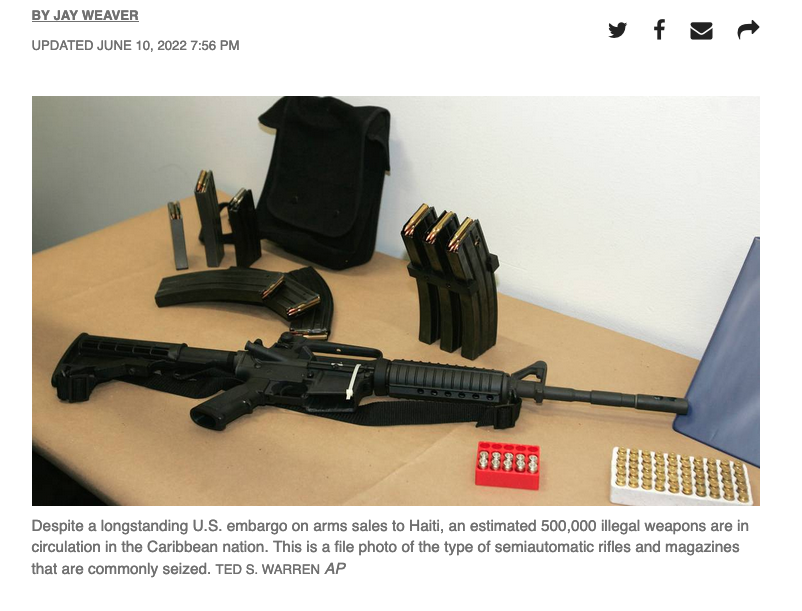 A Haitian man has been charged with trying to smuggle dozens of semiautomatic rifles, handguns and ammunition from Miami to the Caribbean country that were destined for a ring of drug traffickers, according to U.S. authorities. The cache was hidden in a vehicle and seized at the Port of Miami in December 2020, authorities said. Hendel Laurent, a U.S. citizen who resided in South Florida, was indicted by a Miami federal grand jury this week on charges of violating export and smuggling laws. He’s accused of trying to export 21 weapons and magazines to Haiti without a Commerce Department license. Among the makes and models: Smith & Wesson M&P 15, Glock 19 gen 4 and Ruger 9E-SC. An arrest warrant has been issued for Laurent, according to the U.S. Attorney’s Office. He is believed to be in Haiti. Laurent’s weapons-smuggling case underscores the persistent problem of illegal gun purchases and exports in South Florida, according to Homeland Security Investigations and Alcohol, Tobacco & Firearms. Despite a longstanding U.S. embargo on arms sales to Haiti, an estimated 500,000 illegal weapons are in circulation in the Caribbean nation.

Laurent’s case is also among an array of current U.S. criminal investigations involving Haiti, an impoverished country reeling from drug trafficking, gang kidnappings of American missionaries and the assassination of its president last July. Although Laurent is the only defendant named in the new Miami indictment, his alleged arms-smuggling activity is linked to a drug-trafficking case recently filed in the federal court in Milwaukee, Wisconsin, according to law enforcement sources familiar with the connection. The alleged ringleader in that case, Jean Eliobert Jasme, was brought to the United States in April on charges of conspiring with two Haitian police officers to smuggle cocaine from Colombia through Haiti, the Dominican Republic and the Bahamas into the United States. More than a decade ago, Jasme, aka “ED1,” had been convicted in Miami in a sprawling federal probe targeting dozens of narco-traffickers, Haitian government officials and senior police officers accused of moving loads of cocaine from Colombia via Haiti to South Florida. As part of his plea deal, Jasme became a key witness and contributed to at least 17 prosecutions — with all but one ending in convictions. Jasme was rewarded by prosecutors for his cooperation in 2009 when a Miami federal judge cut his 20-year prison sentence in half.