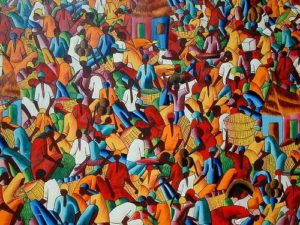 This is an important change in our immigration laws. Please inform the Haitian community about this change. All those who are in the US illegally and whose spouse or parent is a US citizen can now apply for a green card. They are required to travel to Haiti for the visa interview, but this time, they will apply for the waiver to permit them to return to the United States before going to Haiti. Before, these people would have been barred for 10 years, unless the State Department approves their waiver for which they could not apply in the United States. They could only apply for the waiver in their home country. If the State Department denied that waiver, these people would have been out of luck. Now, they can apply for the waiver here. With the waiver in hands, they can travel safely to Haiti for the visa interview, with the confidence they will return to the United States, as long as the marriage is bona fide.   Secretary
Napolitano Announces Final Rule to Support Family Unity During Waiver Process

WASHINGTON— Secretary of Homeland Security Janet Napolitano today announced the posting of a final rule in the Federal Register that reduces the time U.S.
citizens are separated from their immediate relatives (spouse, children and
parents), who are in the process of obtaining visas to become lawful permanent
residents of the United States under certain circumstances. The final rule
establishes a process that allows certain individuals to apply for a
provisional unlawful presence waiver before they depart the United States to
attend immigrant visa interviews in their countries of origin. The process will
be effective on March 4, 2013 and more information about the filing process
will be made available in the coming weeks at www.uscis.gov.

“This final rule facilitates the legal immigration process and
reduces the amount of time that U.S. citizens are separated from their
immediate relatives who are in the process of obtaining an immigrant visa,”
said Secretary Napolitano.

U.S. Citizenship and Immigration Services (USCIS) received more
than 4,000 comments in response to the April 2, 2012 proposed rule and
considered all of them in preparing the final rule.

“The law is designed to avoid extreme hardship to U.S. citizens,
which is precisely what this rule achieves,” USCIS Director Mayorkas said. “The
change will have a significant impact on American families by greatly reducing
the time family members are separated from those they rely upon.”

Under current law, immediate relatives of U.S. citizens who are
not eligible to adjust status in the United States to become lawful permanent
residents must leave the U.S. and obtain an immigrant visa abroad. Individuals
who have accrued more than six months of unlawful presence while in the United
States must obtain a waiver to overcome the unlawful presence inadmissibility
bar before they can return to the United States after departing to obtain an
immigrant visa. Under the existing waiver process, which remains available to
those who do not qualify for the new process, immediate relatives cannot file a
waiver application until after they have appeared for an immigrant visa
interview abroad and the Department of State has determined that they are
inadmissible.

Under the new provisional waiver process, immediate relatives must
still depart the United States for the consular immigrant visa process;
however, they can apply for a provisional waiver before they depart for their
immigrant visa interview abroad. Individuals who file the Form I-601A must
notify the Department of State’s National Visa Center that they are or will be
seeking a provisional waiver from USCIS. The new process will reduce the amount
of time U.S. citizen are separated from their qualifying immediate relatives.
Details on the process changes are available at www.regulations.gov.

I think that the operational term, in the foregoing government garbage, is REDUCE THE AMOUNT OF TIME U.S. CITIZENS ARE SEPARATED FROM THEIR QUALIFYING IMMEDIATE RELATIVES…

At the moment, this could be 11 years.

A reduction to 10.5 years would qualify in this release….or, perhaps 11 years, minus one day.