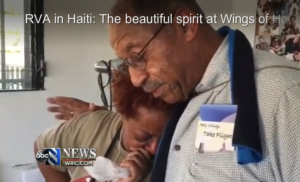 FERMATHE, Haiti — High in the mountains overlooking Port-au-Prince is a refuge for kids who were literally left for dead.

“We find them sometimes in our stairway, like someone just leaves them and walk away,” explained Jacky Asse.

The Wings of Hope is an orphanage for kids with disabilities. There are 31 kids and young adults here and some of the stories have brought one Richmond social worker to tears.

“Most of the time they are not coming with a name, when they enter the building we give them a name,” said Asse.

On Wednesday, the team from Richmond got to see the beautiful spirit these children have. Even through misfortune, there’s still a twinkle in their eyes.

“One of the children noticed my hesitation because the area in which we were going is up on a steep hill and I was having difficulty with getting up the hill,” said Alisha Harris, a Richmond therapist. “The child came down the hill, grabbed my hand and helped me to walked up the hill and I think that that love that he showed to me when I was supposed to have been there to help him, is something that will last for me for the rest of my life.”

Wings of Hope runs on sponsorships from donors all over, including in the United States. When asked if she would return?

“Most definitely, and I hope that someone who is watching this will do the same,” said Harris.

And that’s their wish — that more Americans will come here to Wings of Hope to serve these kids.

While at Wings of Hope, Ava-joye Burnett met a young American man who just keeps going back to volunteer. He’s even learned to speak Creole. Tomorrow, she’ll have his story on why Haiti is so special to him.

8News’ Ava-joye Burnett is in Haiti with ten other volunteers from Richmond. Today, they volunteered at an orphanage. She’ll keep sharing those stories with us all week. Follow her adventures on social media using #RVAinHaiti.