It took eight years, but on Oct. 8 I finally secured a copy of Fusion Telecommunications’ 1999 contract with the Haitian telephone monopoly Teleco. By law the agreement is a public document but Fusion wouldn’t give it to me until the FCC required them to do so. Now I think I know why. 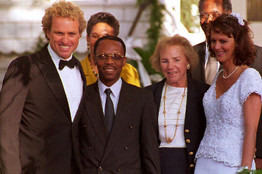 Fusion is run by former Democratic Party Finance Chairman Marvin Rosen. It no longer does business in Haiti. But when it did, former congressman Joseph P. Kennedy II, a staunch supporter of former Haitian strongman Jean Bertrand Aristide, was on the board. So too was President Bill Clinton’s former aide, Thomas “Mack” McLarty, and former Mississippi Democratic Gov. Ray Mabus. In other words, the Fusion name was synonymous with the Who’s Who of the Democratic Party.

Democrats were important to Aristide. President Clinton used the U.S. military to restore him to power in 1994 after he had been deposed in a coup, in part because he was fond of inciting violence against his political opponents. Upon his return in 1994, Aristide resumed his despotic ways. Haitians begged for U.S. help but their pleas fell on deaf ears. In February 2004, Aristide was finally run out of the country.

After eight years, Mary O’Grady finally gets a copy of a controversial Haitian telecom contract. She discusses its contents with Kelsey Hubbard. (Oct. 27)

The interim government opened the books of Haiti Teleco and claimed the company had been looted. A suit filed by that government in federal district court in southern Florida in November 2005 accused Aristide of stealing millions of dollars in telephone revenues. The suit has since been withdrawn without prejudice — it can be refiled at any time — because Haiti says it lacks the funds to pursue it. But presumably any evidence it has remains and is attainable if the Justice Department is interested.

The suit alleges that as president, and “to a certain extent during the interregnum rule [1996-2001] of [René] Préval Aristide controlled virtually all the valuable assets of the Government of Haiti.” Teleco was one of the most important. “Aristide installed his accomplices in management positions within Teleco, and Aristide and those accomplices then caused Teleco to enter into agreements with certain U.S. and Canadian telecommunications carriers, granting them significantly reduced rates for services provided by Teleco in exchange for kickbacks, which further reduced those rates.”

The rate concessions for favored companies shouldn’t have been possible. Haiti Teleco was a monopoly in 1999, and the Federal Communications Commission had “an official settlement rate” for U.S. carriers terminating traffic with state-owned monopolies. U.S. carriers doing business in Haiti had to file contracts at the FCC. If Teleco lowered the rate for any one carrier, the FCC would receive that information when the contract was filed and it would lower the official rate.

In 2000 I began hearing from Haitians who alleged that Teleco revenues were being siphoned off and that Fusion had a sweetheart deal with the monopoly. These sources also told me that Fusion had an office inside Teleco. But Joe Kennedy’s Haitian hero was renowned for eliminating his enemies, and it was impossible to get concerned Haitians to speak on the record. I asked Fusion about its Haiti business but it refused even to confirm that it was carrying traffic to the country.

In 2004 a whistleblower at the New Jersey-based telecom company IDT alleged that he was fired in 2003 for objecting to a deal in which IDT would get a low termination rate in exchange for depositing payments in an account for Aristide.

Haitians continued alleging that well-connected Americans were conspiring to rip off their impoverished country, and I kept writing about it. But the FCC did nothing until December 2006, when the IDT whistleblower asked the FCC for the Haiti file with the contracts. Lo and behold, the FCC said that the file had disappeared from its records room.

When the FCC asked carriers to help it reconstruct the file, Fusion produced the 1999 document. But when I filed to see it under the Freedom of Information Act, the company spent 11 months fighting my request.

Fusion says it “never made any improper payments or engaged in any improper activity with regard to its relationship with Teleco.” But why the megadiscount and how come, if the contract was filed at the FCC, there was no rate reduction for the other carriers?

“I am not aware of any evidence that they filed [the contract],” an FCC spokesman told me last week. But he also said, “If we have evidence that our rules have been violated, we will pursue the matter.” Haitians can be forgiven for not putting much stock in those words.

COMMENT: HAITIAN-TRUTH.ORG
This case was on the way to revealing the Truth. Unfortunately, Rene Preval became president and cancelled the action. This litigation can, and should be reactivated, along with other moves against Aristide.

The Nation deserves the Truth.