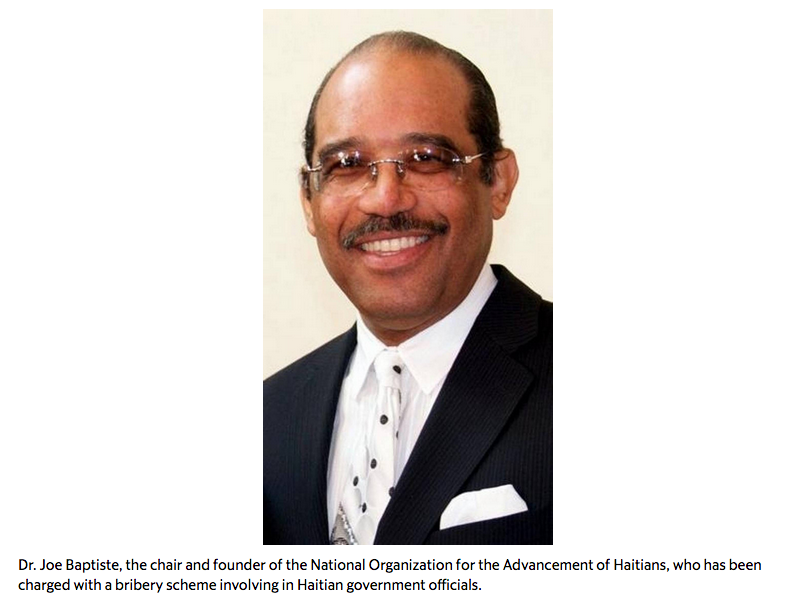 Now Dr. Joseph Baptiste, a retired U.S. Army colonel and practicing dentist, is accused of conspiring to bribe senior Haitian government officials to win support for an $84 million port project in the country’s northern region. And he funneled the $50,000 in bribes through his non-profit charity meant to help Haiti’s poor, a federal agent said.

Baptiste, 64, was arrested on Tuesday at his home in Maryland after being charged in federal court in Boston with conspiracy to violate the Foreign Corrupt Practices Act and to commit money laundering.

Baptiste supposedly cut a plea deal at the end of December 2015 but backed out of it, according to authorities. It’s unclear why the U.S. attorney’s office in Boston waited so long to charge him. He was scheduled to make an initial appearance Tuesday afternoon in federal court in Maryland, according to the U.S. Attorney’s Office in Massachusetts. His attorney, Donald LaRoche, could not be reached for comment.

The case against Baptiste unfolded in Boston, part of a 2014 U.S. government probe into allegations that Haitian-American businessmen had been offering to bribe high-level Haitian government officials in exchange for the ability to do business in Haiti, according to court documents.

According to the criminal complaint, Baptiste solicited bribes from an undercover FBI agent “purportedly to be paid to Haitian government officials” in connection with Haitian infrastructure projects, including a mining project and the construction of a $84 million port in Môle-Saint-Nicolas.

Meeting with the agent in November 2014 in Boston, Baptiste said he could facilitate a meeting with “top-level Haitian government officials” and described how he could steer payments to them by offering to get financing for lawmakers’ pet projects, funneling the money through his Maryland non-profit. Only part of the donations would be used for the actual projects, the rest going to pay off officials, the complaint said.

“I believe that when Baptiste discussed giving a $100,000 donation to build a school, but spending only $80,000 to build the school, he was giving an example of how to funnel a bribe — the remaining $20,000 — to a government official,” special agent Garett Trombly wrote in support of the criminal complaint.

Trombly described other incidents where Baptiste, the chair and founder of the nonprofit, National Organization for the Advancement of Haitians, bragged about his access to top government officials and past bribe payments funneled through his nonprofit to get cellular and power-plant licenses in Haiti.

While Baptiste had a tradition of hosting Haitian dignitaries — and Democrats running for U.S. office — at his home, he might have exaggerated his contacts, access, and role in Haiti’s business environment with federal agents.

The proposal to build a port at Môle-Saint-Nicolas didn’t go anywhere. It was dismissed by then-Haiti Finance Marie Carmelle Jean-Marie in 2014 and also by then- Prime Minister Laurent Lamothe who thought it wasn’t feasible. The criminal complaint doesn’t name the Haitian government official whom Baptiste said he needed to pay in order to ensure the project’s success. Baptiste received $50,000 in wired funds from the FBI to his nonprofit, Trombly said, which he “ultimately used … for personal purposes.”