For decades, United Nations (UN) peacekeepers accused of sexual exploitation and abuse have operated under an umbrella of impunity.

Last week, Christian Saunders, the UN director of the Office of the Under-Secretary-General for Management, told Al Jazeera’s The Stream that this was about to change.

“There is no longer going to be impunity,” he said, adding that UN Secretary-General Antonio Gutteres is going to work with member states to ensure abusers are “held criminally responsible” for sexual abuse.

He highlighted that Gutteres had committed to “zero tolerance” and the creation of a “high-level task force.”

“This was almost the first thing he did taking office,” said Saunders.

Saunders outlined the new four-part UN strategy, which revolves around a victim-centric approach, with victim’s rights advocates in all the major peacekeeping operations; an end to impunity; increased transparency; and an awareness of the broader context of sexual abuse as a danger for women all over the world.

Saunders also highlighted what Gutteres didn’t do: “He didn’t wait for a crisis in order to act.”

Of course, that depends on how you define a crisis.

“Since 1948, the UN has been raping third world women,” said Ezili Dantò, the founder of the Haitian Lawyers Leadership Network.

Al Jazeera’s recent Faultlines documentary, Haiti By Force: UN Sex Abuse, spotlighted one current example. Femi Oke, who presents both Faultlines and The Stream, spoke to Haitian women who say they were raped by UN peacekeepers there. Some of them were under-age at the time; some of them are now single mothers as a result; most described anonymous, violent attacks they didn’t report to the authorities.

The United Nations cites 85 allegations of sex abuse in Haiti between 2008 and 2015, but independent estimates suggest the figure should be much higher, at more than 500 women raped or exploited by UN personnel since 2005.

Haiti isn’t an anomaly. There are reports of abuse by UN workers in several other countries, including the Central African Republic, the Democratic Republic of Congo and South Sudan. Africa hosts nine of the 16 UN peacekeeping missions currently active.

On The Stream, Megan Nobert, founder and executive director of Report The Abuse, pointed out that sexual abuse by UN personnel is not just happening to the local population, but against the humanitarian community itself.

Impunity is enjoyed by those who commit these crimes because international laws are interpreted to grant peacekeepers immunity from any criminal liability in the countries they serve.

Former UN investigator Peter Gallo calls this a “fiction.” “There is no immunity under the 1946 Convention on Privileges and Immunities for sexual offences; the UN has maintained the fiction that there is to not allow these cases to get in front of the Haiti courts.”

Dantò agrees. “The law doesn’t actually give impunity. It gives immunity to the UN for the purposes of the mission.  Raping a four-year-old child in return for food is not part of the mission of the UN in Haiti or anywhere else, so they don’t have any immunity… So this whole conversation about the UN having immunity and not being able to do anything about the perpetrators is false.”

Gallo says the UN have even stretched this Convention to stop UN staff members testifying as witnesses in sexual abuses cases, even when the UN is not accused of any wrongdoing. Citing a case in the Central African Republican against French peacekeepers, he said, “This is the equivalent situation: can you imagine someone who works for the UN, goes out for a sandwich at lunchtime in New York, and witnesses a crime, a mugging. And the UN prevents them from giving a statement to the New York police ‘because I’m a UN staff member and I’m somehow magically protected that I’m above the law.’ Not because a UN staff member committed a crime but because a UN staff member was involved in the loop of reporting it. That is a complete and utter abuse of the 1946 convention.”

Dantò dismissed the UN’s new policy and promises. “It’s an absolute joke,” she said. “The UN has been saying this since 1948: zero tolerance.” She added that in practice this only resulted in nine-day suspensions for impregnating a minor, when any action was taken at all.

She labelled Saunders’ statements as ““mythological,” variously calling the UN “an imperial force,” “a colonial screen,” a “criminal organization,” an “abomination” and “an institution that is above the law.”

She called on US President Donald Trump to not fund the UN mission in Haiti. “Haitian women want the UN out of Haiti,” she said.

In February, the UN announced the number of reported cases worldwide has risen since 2015, something they attribute to their efforts to encourage victims to come forward.

URUGUAY SHIELDS JOHNY JEAN’S IDENTITY, NOT TO PROTECT HIS PRIVACY BUT INSTEAD TO SHIELD THE URUGUAYAN PUBLIC FROM THE TRUE FACTS WHICH ARE REALLY HORRIFYING…THEIR SAILORS VICIOUSLY GANG-RAPED JOHNY JEAN OVER A PERIOD OF TIME AND VIDEO TAPED THE CRIME!!! 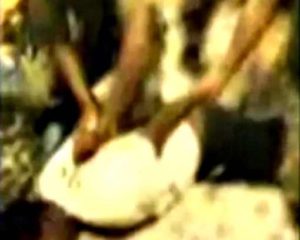 I have been a complete and total fool!

I did not realize why the Uruguayans were insisting on a sealed courtroom, with none other than participants allowed access. Before Johny’s American attorney, Ed Marger, intervened, Johny Jean would have flown into Uruguay – unannounced -, arriving at 9:30 AM –( if the plane as one time, and it rarely is.) for a 2 PM court appearance, and then placed on a night flight back to Haiti.

Luckily, Johny arrived a day early, and his 3 PM flight…actually landing at 5 PM had no adverse effect.

This was one of the things Ambassador Romero Rodriguez discussed with Haitian hero Fritz Dorziair as they privately discussed how things could be kept under wraps, during their secret meeting on the afternoon of last Monday.

QUOTE:   “Local media showed images of the young man in a suit and tie after he landed at Montevideo’s airport Wednesday afternoon. He was accompanied by his mother, two lawyers and a Haitian foreign ministry official.

Court spokesman Raul Oxandabarat earlier told The Associated Press that the man would testify during a closed hearing. Oxandabarat said the next steps in the case would depend on the young man’s testimony.”

What is this crap about protecting Johny Jean’s identity??

Actually, I have just Googled JOHNY JEAN RAPE and the search provided “About 81,600,000 results (0.27 seconds) “So confidentiality is really not an issue.

Johny Jean’s testimony was what one could expect from a shy black boy, thrown onto the stage in a foreign courtroom full of strangers, speaking a strange language in a nation that has something like 2% of the population BLACK.

What spoke, and spoke horrible, for Johny was the two minute video tape, created by Johny Jean’s first raper. He viciously sodomized – Jean Jean – that’s his name – Johny Jean – it is not secret for the sake of his embarrassment – The first Uruguayan sailor who ripped into Johny Jean’s anus had his friends restrain the screaming, struggling, frightened, badly injured Johny Jean, while he went to take a shower.

After showering, the first of the vicious rapists dried himself of and then returned to the room where his friends held Johny jean face down while others violated him in a horrible way as the first criminal videotaped the sex assault that would forever destroy Johny John, and his family, throughout the small community of Port Salut.

Rather than be recognized as victims, they were treated a pariah because they were an embarrassment to the Uruguayan MINUSTAH troops who spent a great deal of money in the community’s economy.

The community shunned Johny and called him MRS MINUSTAH.

So, it was not the words of Johny Jean that should influence the Uruguayan court as to whether or not a crime was committed. They already knew this from viewing the unedited 2 minute tape, taken by the first rapist, as his friends beat and sodomized Johny Jean to the point that he remained, crippled in bed for two weeks. His injuries were examined by Cuban doctors and they stated these injuries were typical of a forced and vicious sodomization. He was still bleeding weeks later.

This is why the Uruguayans insisted on confidentiality, in the court appearance. This was not to protect Jeany Jean. It was to protect the Uruguayan public from seeing, and hearing the screams of Johny Jean, as this young man was destroyed by sailors of their MINUSTAH unit.

It is a national disgrace, supported from the top as President Mujica, after writing an apology to President Martelly, and the Haitian people, now says that the Uruguayan military were just engaged in a little horseplay.

There was no rape,

There was no crime.

In other words, Johny Jean and the Haitian Nation are simple Black liars who would, and will never be believed in a nation composed of 88% European descended folk. Uruguay has 2% black members of their population.

Someone stole our unedited copy of the tape but we will acquire another and let you – the world – decide whether or not the Uruguayans are slime in their effort to avoid responsibility in this case. In the meantime, we present the ABC’s edited, blanked out copy It is bad enough.

If they Uruguayans were men  – rather than a band of raping homosexuals – they would have settled this immediately and hidden their national inclinations from the world. This  could have protected their macho image.

Perhaps President Mujica will come out of the closet and announce his Nations support of same sex marriages.

Time for MINUSTAH and it raping, child-molesting troops to go home. The cocaine trade and kidnap business will suffer, but we can do without MINUSTAH’s assistance.

Johny Jean’s attorneys, and an observer from Haiti’s Ministry of Foreign Affairs were   in the closed court. Johny’s American attorneys, Ed Marger and Mike Puglise, attended the tribunal with Gervais Charles, the Haitian member of their team, and Maitre Fortune Dorlean,head of Foreign Affairs judicial department.

The wannabe non-lawyer, Fritz Dorziair was not admitted to the proceedings and sat in the corridor throughout the hearing, like a chauffeur, waiting for his passengers.

It is time for President Michel Martelly, Prime Minister Laurent Lamothe, the Haitian people, and those throughout the world, who cherish justice, to stand up and challenge Uruguay’s refusal to accept the unsavory facts that their sailors raped a poor defenseless Haitian boy and then wiped their filthy cocks on the Uruguayan flag.

JUSTICE FOR JOHNY JEAN, AND OTHERS, WHO ARE RAPED, MOLESTED, OR EVEN MURDERED  BY UN CRIMINALS  – THROUGHOUT THE WORLD – WHO HAVE IMMUNITY FROM PROSECUTION!!