It would be rare for the tiny Red Deer Titans Track Club to produce one national champion. But to produce two Canadian champions is almost unheard of.

The club has about 24 members, and today, it has two runners who are the country’s best in their discipline.

First, there was Jeremiah Lauzon, who captured a national under-20 medal in the 200 metre at the Canadian Track and Field Championships in Quebec last month.

Then, long-distance runner Jared Howse followed that feat up, winning gold in the under-18 2,000-metre steeplechase at the Legion National Track and Field Championships in Cape Breton, N.S., on Aug. 10.

Before this year, no Red Deer track athlete had won a medal on the junior national stage.

“Red Deer is really under the radar compared to Calgary and Edmonton. Even Leduc, all the bigger clubs. We’re a little bit smaller, so it’s good to represent Red Deer in the best way we can.

“Placing at nationals puts a good name on Red Deer.”

As well as the national gold, Howse captured a bronze in the under-18 3,000 metre at the national meet last weekend.

His time in Cape Breton was a little bit slower, at 6:02.30, but still managed to give him a win over Quebec’s Xavier Duchesneau by less than half a second.

“I actually out-kicked him the last 100 metres. It was a bit nerve-racking. The guy who was actually in second, tripped on the water barrier. He unfortunately fell.

“I just knew at that point I had to go for the guy in first. He was getting a little far away. I was a bit worried, so I just gave it everything I had the last 100 to try and catch him,” he said.

“I was super excited. I was just pumping my arms in the air after the race. I was really, really excited to win nationals after all those years of training.”

Lauzon’s 20.90 earlier this summer is still the fastest under-20 200-metre time in the country.

Simply put, the two athletes are putting the little club on the map in a big way.

The 19-year-old Lauzon will attempt to do even more to spread the word about Red Deer’s success this fall. He will attend Simon Fraser University on a scholarship and run track in the National Collegiate Athletic Association’s Division II.

Considering he represented Canada on the international stage at the under-20 Pan American Games this summer, Lauzon has already reached heights that don’t happen often to central Alberta runners. He only started seriously running in Grade 10.

Along with representing Canada again, Lauzon has another goal close to his heart. Born in Haiti, he came to Canada around the age of three. He hopes maybe there’s a chance to represent the country he came from 16 years ago.

“Back when I first started, I just wanted to get a scholarship and maybe run for Canada. I’ve done both of those things now. Things have changed now, with bigger views. I want to run for Canada again obviously,” he said.

“I feel like I should be able to for the under 23 team … I’d like to be able to run for Haiti if that ever becomes a possibility. It would be an amazing experience because that’s my home country. I love Canada and Haiti.”

While the 2020 Olympics in Toyko might be just out of reach for the local track stars, 2024 could be the year they step into the spotlight among the world’s best. 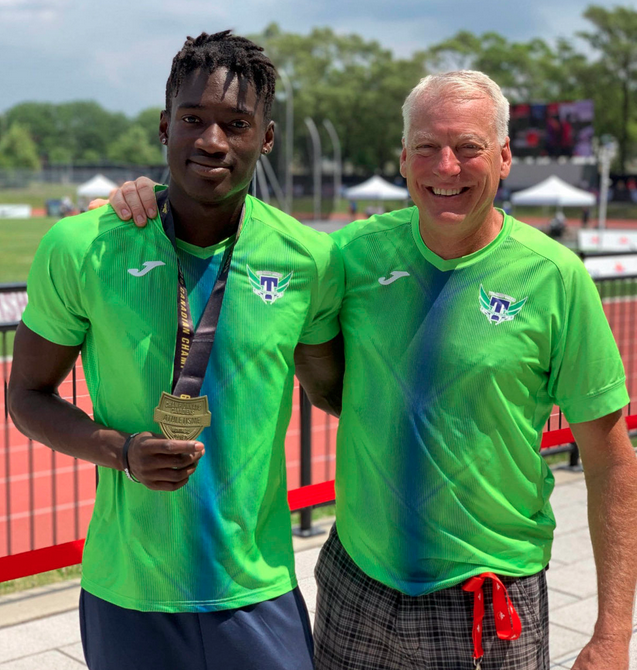