The mystery of an annual disappearance of a UK butterfly has been solved, scientists say after tracking the painted lady’s migration on radar.

They found that the butterflies do not die in this country at the end of summer, as some believed, but make a high altitude escape south – one leg of a 9,000-mile migration.

The team analysed 60,000 sightings from British observers for the study.

The discoveries are “astonishing”, says Richard Fox, a co-author on the paper.

The findings are based on data from 2009 and published in the journal Ecography.

It was known that painted ladies come to the UK from Europe to breed. But this study is the first to explain where the butterflies go as the cold weather approaches later in the year, said Richard Fox, surveys manager for Butterfly Conservation. 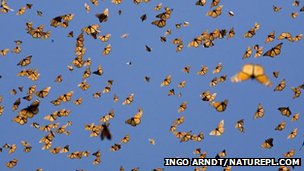 “The radar element of this study has given us an answer to that,” Mr Fox told BBC Nature.

“They are going southwards but they’re doing it out of human eyesight, up in the sky.”

The butterflies travelled at altitudes of over 1,000m but would descend to benefit from favourable winds, the study found.

The findings debunk one theory, called the “Pied Piper hypothesis”. That suggests that painted ladies come to UK to “just sit around in Britain hoping that it’s the promised land and suddenly find winter comes and they all die”, according to Mr Fox.

“The apparent lack of a return migration of the late-summer generation of painted lady butterflies was one of the greatest enigmas in insect migration ecology,” said Dr Jason Chapman, a researcher at Rothamsted Research, Hampshire, the longest running agricultural research station in the world.

“But through a combination of traditional monitoring by butterfly enthusiasts and new radar techniques we have finally solved this long-standing puzzle,” he said.

The project combined the citizen science of “thousands and thousands” of eyes on the ground, from the “fringes of the Arctic circle” to sub-Saharan Africa, with high altitude insect-monitoring radar. It was these two working together that enabled the team to make the breakthrough, said Mr Fox.

This tiny creature weighing less than a gram, with a brain the size of a pin head, and no opportunity to learn from older, experienced individuals, undertake an epic intercontinental migration”

The radar element of the study was led in the UK by Rothamsted Research. It showed that the butterflies flew at an average height of over 500 metres on their way south, reaching speeds of up to 30 miles per hour (48km/h) in favourable winds.

Twenty six million were counted departing in the autumn.

Using data from 60 different study sites on the way, the study aimed to plot the migration route taken by painted ladies.

It found that it could take up to six successive generations for the species to complete a 9000 mile (14,400km) round trip from tropical Africa to the Arctic Circle.

For each new generation, the butterflies must find plants for their caterpillars to eat, and that is thought to be behind their need to keep moving.

The journey is much longer than that undertaken by the famous Monarch butterfly, which migrates between Mexico and Canada.

“The migration of the monarch in North America is kind of world famous as this of wonder of nature and yet this annual migratory movement that painted ladies are undertaking is even greater,” said Mr Fox.

“So we’ve kind of got this amazing creature right under our noses without really realising,” he said.

“This tiny creature weighing less than a gram, with a brain the size of a pin head, and no opportunity to learn from older, experienced individuals, undertake an epic intercontinental migration.”