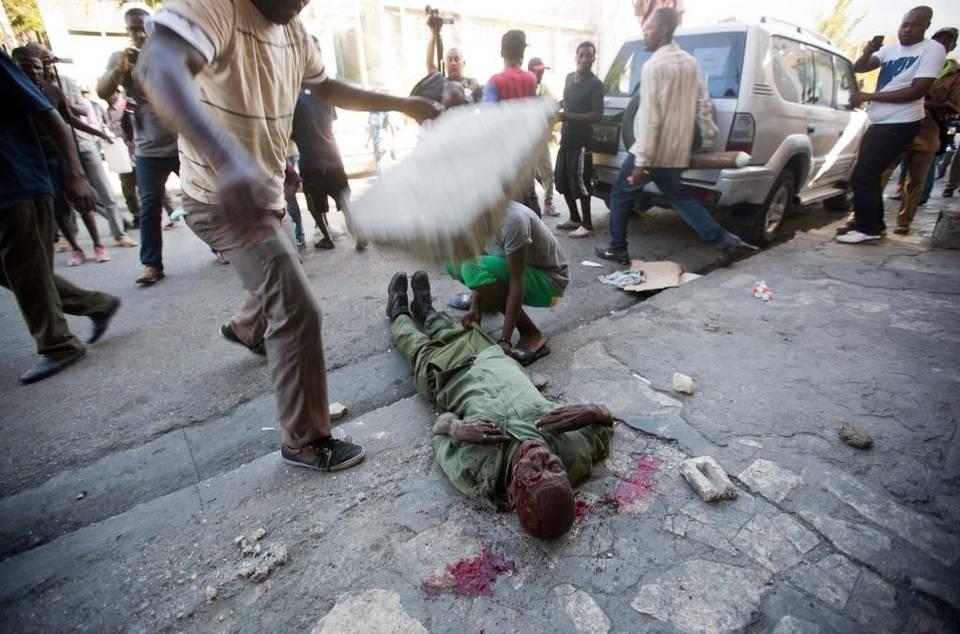 An anti-government protester drops a large cinderblock on the head of Neroce R. Ciceron, a  78 year old former captain in Haiti’s disbanded army, as other protesters and members of the press stand behind while he’s beaten to death in Port-au-Prince, Haiti, Friday, Feb. 5, 2016. Members of Haiti’s abolished military clashed with protesters who were demanding the resignation of Haiti’s President Michel Martelly. Dieu Nalio Chery AP

Haiti President Michel Martelly says a last-minute agreement on how a caretaker government will be installed in Haiti after he leaves office Sunday is intended to help the country get out of its ongoing political impasse.

Martelly and leaders of both chambers of parliament reached the deal hours before his term ends with no elected successor to pass the presidential sash to. Martelly, recognizing the support of the international community, noted that this was a “solution out of the crisis,” that was decided upon by Haitians after three weeks of — often stalled and frustrating — negotiations. They finally concluded in the early hours of Saturday morning with a deal. Prime Minister Evans Paul was notably absent from the signing ceremony.

Under the plan, Paul will run the country until a provisional president is voted by both chambers of parliament sitting as the National Assembly. That interim president will then oversee the selection of a consensus prime minister whose primary job will be to organize the postponed legislative and presidential runoff vote within 120 days.

The plan is for the second round to take place on April 24. The new president is to be installed on May 14.

“The constitution didn’t project this situation, so as legislators we have the responsibility to stay as close to the constitution as possible, which is the appointment of a new president by the National Assembly,” said Jerry Tardieu, minority leader in the Chamber of Deputies. “But the crisis is not over yet. For the choice of the prime minister, we need to put everybody at the biggest round table — the opposition forces including those who have been on the streets, the private sector, civil society. All have to be consulted so that we can get to as close to a consensus as possible.”

Senate President Jocelerme Privert, congratulated Martelly for his role and said the accord is “crucial for the avenue of our nation.”

As part of the agreement, lawmakers agreed to let Martelly give his final address to the nation at 11 a.m. Sunday during a session of the National Assembly.

The agreement, which provides a framework for filling the institutional vacuum because of postponed elections, came after dueling protests Friday, one of which turned deadly. Throughout the day, dozens of armed men dressed in green army uniforms roamed the capital on motorcycles and in trucks.

Some eventually clashed with anti-government protesters. One protester dropped a large cinder block on the head of one of the men and beat him to death in front of journalists. The man was identified as Neroce R. Ciceron, 78, a former captain in Haiti’s disbanded army. Haiti’s Defense Ministry, however, said they have no record of the man in army books.

Pro-government supporters also rallied in the capital, where grocery stores were packed with worried shoppers. The capital’s airport also was filled with equally concerned travelers, opting to take advantage of the Carnival holiday — it starts Sunday — to leave and take a break from the political uncertainty.

On Saturday afternoon, tensions continued with a small crowd of protesters demanding that Martelly leave while shooting was reported north of Port-au-Prince along Route National 1 near the town of Arcahaie. A car was burned and at least one person reported being carjacked. A police station in Saint Medard was also attacked by armed individuals. No casualties were reported, however, police assigned to the station fled.

The accord settles a major disagreement between the executive and the parliament. Martelly, according to Senator François Anick Joseph, had planned to install Supreme Court President Jules Cantave as his successor.

Martelly could still put Cantave’s name before the parliament for a vote. The other leading candidate is Privert, a former minister of interior who was jailed by the country’s last transitional government.

On the popular political talk show Ranmase on Radio Television Caribes Saturday, political analysts took issue with the accord. Some objected to Martelly’s involvement, accusing him of creating the crisis because he had failed to hold elections for four years. Others said, the accord will not quell the increasingly violent street protests or help promote the confidence that is needed for Haiti to finish its electoral process.

Both the Aug. 9 legislative first round and Oct. 25 presidential vote have been dogged by allegations of fraud in favor of Martelly’s candidates including presidential pick, Jovenel Moïse. The allegations sparked a political upheaval and violent street protests with opposition presidential candidate Jude Célestin announcing he would not participate in the scheduled Jan. 24 vote.

“This accord presents a huge headache for the country going forward,” said Stanley Lucas, a Martelly supporter, who advocates choosing the head of the court as has been done in the past.

Charles Henri Baker, who was among the 54 candidates who ran for president in the recent elections, said “the consensus on the streets is in order to not have a presidential void, go with a judge from the Supreme Court.”

“Are we trying to resolve the problem or create more problems?” he said.

The international community had been losing patience with Haiti as it struggled to reach an agreement. While the head of an Organization of American States special mission, Ambassador Ronald Sanders, was hopeful an agreement would be reached, others grew concerned. Among them, Haiti Special Coordinator Kenneth Merten who quietly slipped into Port-au-Prince this week to see how negotiations were progressing.

Sanders, a diplomat from Antigua and Barbuda, welcomed the accord and encouraged all “to implement the formula going forward.” Martelly had asked the OAS to deploy the special mission to observe the process.

The mission congratulated Martelly for maintaining his position to leave office by Feb. 7 and “ for his willingness to engage in constructive dialogue with stakeholders prior to his departure, to ensure that the State continues to function peacefully and in the social and economic interest of the country.”

“The situation in Haiti is exceptional and it required exceptional solutions,” Sanders said. “We are pleased that the stakeholders have all committed themselves to democracy, peace and stability, amid a constitutional vacuum created by the absence of an elected President to replace Mr. Martelly.”

This is the second time in 12 years that Haiti will be run by a provisional government. The constitutional and political crisis comes on the 30th anniversary of the fall of the father-son Duvalier dictatorship, Feb. 7, 1986.

The killing of a 78 year old man, Neroce Cicirone, an ex-soldier, is typical of the Aristide/Preval/Lavalas cruel, animal thirst for violence.

The man was tired and couldn’t walk further. So he sat down and a mob attacked him. They stoned him to death, as the media watched – filming the event.

This is what the media loves.

Click on this to see what the Aristides/Preval/Lavalas people really love and will reintroduce as soon as they can – perhaps tonight!